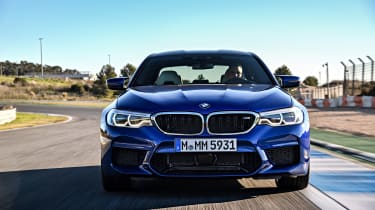 BMW has confirmed its 2018 MotoGP M5 safety car will be a test bed for the new M5 Competition Pack, which will be launched some time this year.

We’ve seen the MotoGP M5 before, featuring a swathe of M Performance carbonfibre parts, but BMW M GmbH President Frank van Meel has now confirmed it will also act as a development platform for the upcoming M5 Competition Pack.

> Click here for our review of the new BMW M5

Likely to echo the Competition Packs in BMW’s M3 and M4, we expect the M5 to include a combination of drivetrain and chassis upgrades. In an M4, the Competition Pack is made up of new adaptive dampers, a more direct steering rack, a recalibrated active rear differential and new 20-inch alloy wheels. The 3-litre straight-six engine’s power output is also bumped up 20bhp. 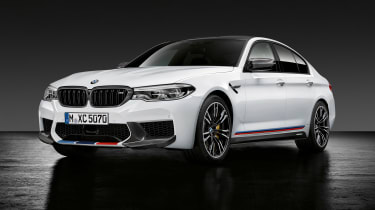 The changes may seem subtle, but they helped transform the standard M4 into a far better driver’s car, containing the standard car’s wayward rear axle and dramatically improving steering feel.

For the M5, we expect a similar set of upgrades, including a rise in power over the standard car’s 592bhp. It’s not unreasonable to expect an output of over 600bhp, a figure closer to arch rival Mercedes-AMG’s E63 S.

The standard M5’s switchable all-wheel-drive system should ensure the extra power is kept under control, but we expect BMW’s aim for the M5 Competition Pack will focus on improving the big saloon’s precision, more than outright grunt thanks to the standard car’s already proficient outputs.

We were impressed by the standard M5 on the international launch last year, but judging by the M4, a Competition Pack could make it even better.