Based on the M6 GT3, the GTLM enters final stages of development ahead of a 2016 race debut 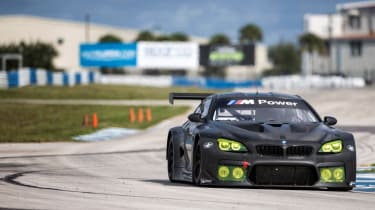 BMW has released new pictures of the M6 racing car it’ll field in 2016’s IMSA WeatherTech SportsCar Championship. Based on the M6 GT3 (covered below), the M6 GTLM will make its world debut at the Daytona International Speedway today, having completed its first US test at the Sebring International Raceway earlier this month.

Though the car shares many parts with the GT3, it’s been built to conform to the IMSA series’ unique regulations. Under the bonnet is a race-adjusted version of the road M6’s twin-turbo 4.4-litre V8 engine, which like the GT3, will suffer from the effects of championship power limitations. 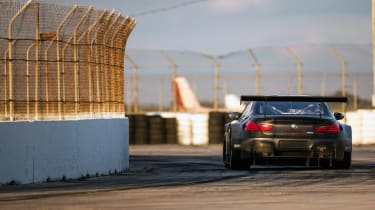 That should ensure peak output will fall well below the road car’s 552bhp and 501lb ft of torque, but of course, the lighter, downforce-producing and slick-wearing racer will be significantly faster on track.

The car that the GTLM is based on, the M6 GT3, was first tested back in February. Pricing for the car was released in August -  you can read about it here.

Back at the car's launch, BMW Motorsport Director, Jens Marquardt, said: ‘this is a big moment for everyone who has worked so intensely and passionately on the development of the BMW M6 GT3. This car incorporates all the experience we have gained in recent years on the endurance and GT racing circuits.’ 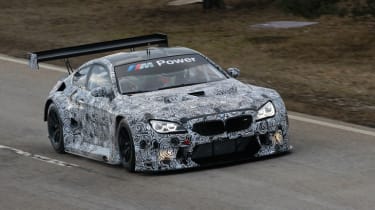 Orders for customer cars have already been taken, with several set to enter competition on GT3 grids in 2016.

German racing driver Jörg Müller was behind the wheel back on the first drive and confirmed the car’s potential: ‘A roll-out is obviously just an initial performance test but, on the whole, everything was very good and we had no problems. The engine really impressed me. It is powerful and has good torque, which is important for a car like this.’

Replacing the longstanding Z4 GT3, the M6 GT3 racer is will compete at prestigious sports car events like the Nürburgring 24 Hours. Marquardt added: ‘We are well on schedule with the development, and are confident we will be able to take to the track in 2016 with a package that is competitive from the outset.’