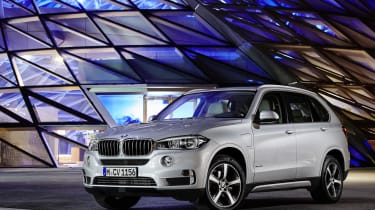 The boys from Munich have been busy in recent years, not only launching the firm’s first production electric car, the i3, but also a plug-in hybrid sports car in the shape of the stunning i8.

While both of those cars spearhead the BMWi brand, the first regular BMW plug-in hybrid is set to make its debut – the 85mpg, X5 xDrive40e.

At its heart is a four-cylinder, turbocharged petrol engine, like that you’d find in a BMW 328i or MINI Cooper S in different states of tune. It’s hooked up to an eight-speed Steptronic automatic transmission through a synchronous electric motor. As the xDrive moniker suggests, power is sent to all four wheels.

Because of the different way in which petrol engines and electric motors develop their power and torque, these numbers can’t simply be added together; instead, BMW quotes a total system output of 309bhp and 332lb ft of torque.

It’s all controlled through an eDrive button on the centre console, that lets drivers tailor the powertrain according to their preferences. That’s optional, of course – many drivers will be happy enough leaving the car to its own devices, where both electric motor and engine work in harmony. 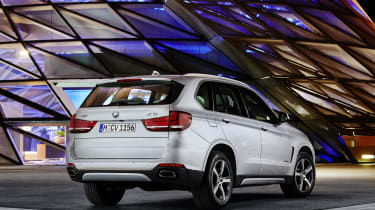 As with many hybrids, the electric power does much of the work at lower speeds and will, provided the accelerator pedal isn’t booted, handle all running below 44mph. A 'MAX eDrive' mode locks the car in electric power for up to 19 miles and at speeds of up to 75mph.

'Save’ mode can be used to draw some of the engine’s output for battery charging, but as a plug-in hybrid the main benefits will be realised by plugging it in each night – the 9 kilowatt-hour lithium-ion pack can be recharged from a regular socket in around 3 hours, 50 minutes from empty. Fit one of BMW’s i Wallbox Pure systems and charging drops to 2 hours 45 minutes.

The alternative benefit of the plug-in hybrid drivetrain is performance. 0-62mph takes 6.8 seconds – identical to an X5 xDrive30d – and top speed is limited to 130mph.

And economy? BMW claims 85.6mpg on the combined cycle, and CO2 emissions of 77g/km. Those of course depend entirely on how you use the available powertrains – commute within the 19-mile electric range every day and you’ll pay pennies to do so, but if you spend most of your time on the motorway then one of BMW’s diesels will likely suit you better.

Visual changes are subtle – xDrive40e models get a charging connection point in the left front wing – which glows blue when charging – and at the rear the exhaust system has twin trapezoidal tailpipe tips. An eDrive badge like that found on the i3 and i8 can be found on several exterior parts, while mechanical differences amount to standard self-levelling rear air suspension.

The X5 xDrive40e goes on sale in the Autumn. Prices have not yet been announced.