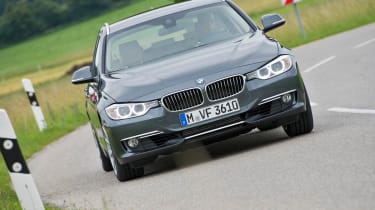 The BMW 328i Touring. It's the most potent petrol-engined model in the new estate range which, in its entirety, is expected to account for one in five British sales of BMW’s sixth-generation junior exec and be even more popular across Europe. In line with the saloon, the new Touring is bigger and roomier than the car it replaces, but lighter and more efficient, too.

As before, the Touring’s tailgate window can be lifted separately though the tailgate itself is now powered and, if you’re confident about standing on one foot with an armful of shopping, will open by waggling your other foot under the bumper with the optional remote sensor installed. Easier said than done.

Perhaps of more obvious practical benefit is the rearranged rear seating – now split 40:20:40 rather than 60:40 – and an extra 35 litres of boot space with the rear seats in place, making a class-leading 495 litres in total. Fold them flat and cargo capacity balloons to a whopping 1500 litres.

Apart from having stiffer rear springs, the Touring is mechanically identical to the four-door and, powered by BMW’s 242bhp 2.0-litre petrol turbo four, just as rapid, the 6.0sec 0-62mph time possible when it’s teamed with the excellent 8-speed ZF auto (a 6-speed manual is optional) adding just a tenth to a similarly equipped saloon’s.

Not quite as comfortable over broken surfaces as the superbly supple saloon but, otherwise, very impressive. If you want to have some fun, forget about the Eco Pro and Comfort modes in the four-way Driver Control system. Eco Pro makes everything feel so slugged you’d only want to use it if you were down to your last few thimbles full of petrol and no fuel station in sight.

Comfort is the natural default and generally fine but leaves the steering quite lifeless around the straight ahead. In Sport and Sport+ everything’s tauter and more responsive. You’ll use more petrol but discover that the four-pot turbo sounds a lot more urgent and interesting in the upper reaches of its rev range and that the chassis really is a fluent, beautifully balanced thing.

Whichever way you look at it – performance, dynamics, space, practicality – the 328i Touring seems to have the measure of its closest rivals from Audi and Mercedes, and by a breezy margin when it comes to efficiency: 242bhp, 43.5mpg and 152g/km will leap off the page for anyone conducting a comparison spec check. In addition to which, the BMW is simply more fun to drive.

Fast and efficient as the petrol 328i Touring is, it’s the 181bhp 320d diesel that will make up the bulk of Touring sales in the UK. And with a combined consumption of 60.1mpg and 124g/km of CO2, it isn’t hard to see why.