Hypercar maker is latest to reveal a virtual concept for the popular racing game; updated with a video 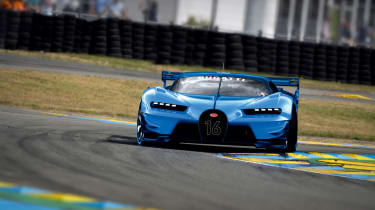 Bugatti might market its products to the world’s richest individuals, but the brand has been surprisingly open to the idea of its products appearing in the egalitarian medium of videogames.

Gamers can already drive the Veyron in titles like Forza Horizon 2 and Gran Turismo 6, now soon the firm has previewed its latest design language in the Gran Turismo series with a Vision Gran Turismo concept. A full-size model of the car is due to appear at the upcoming Frankfurt motor show on September 17.

The Vision Gran Turismo is instantly recognisable as a Bugatti, with more than a hint of Veyron to its overall shape. It's much more dramatic though, with accentuated forms, slimmer headlights, racing-style wheels and an enormous, GT3-style rear spoiler.

Dig further, and you'll note similarities to some of Bugatti's past models, such as the blue and black colour scheme inspired by the company's Le Mans-winning 1937 Type 57 G Tank. There's also a prominent fin stretching from the Vision GT's roof to its spoiler - similar to that of current LMP1 cars, but also referencing the rivetted seam running down the tail of the classic Type 57 Atlantic.

Despite these influences, Bugatti was careful not to create 'a retro-style race car'. Instead, explains Sasha Selipanov, Head of Exterior Design Creative Development at Bugatti, the concept was designed to 'transfer the feeling and mood of these special moments in Bugatti’s history to a modern vehicle'. 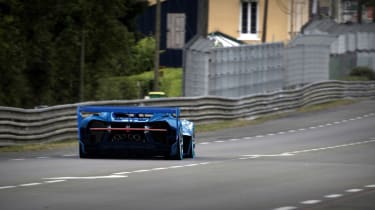 The racing car feel continues inside, where the Veyron's luxurious appointments make way for bare carbonfibre. Attention to detail is high however, with beautifully-stitched racing blue fabric on the seats, door cards and steering wheel grips.

Bugatti says it’s ‘embarking on a new chapter’ in its corporate history as Veyron sales come to a close and its successor is readied.

The appeal of Gran Turismo though is that it opens up the Bugatti brand to millions of people worldwide. Only a fraction will ever be Bugatti buyers, but it’s instrumental in building goodwill for the company.

‘Bugatti is the world’s most exclusive super sports car brand and Bugatti cars are only available to an extremely small group of automobile connoisseurs,’ explains Wolfgang Dürheimer, President of Bugatti Automobiles. 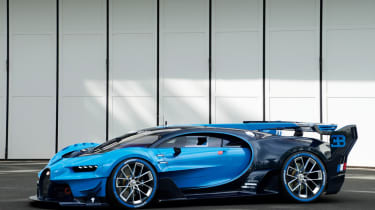 Despite this, Dürheimer acknowledges that ‘Bugatti is admired and loved by countless people throughout the world,’ and the brand wants to reward this enthusiasm with closer links in the gaming world. ‘This is a project for our fans’, he adds.

Achim Anscheidt, head of Bugatti’s design team, says the Vision Gran Turismo has not been developed merely as a fantasy product, but one that could actually be driven on circuits in the real world. While this is no guarantee the car will be produced, it does suggest features from the car may find their way into the Chiron or other future Bugatti models.

No date has been announced for the Bugatti Vision Gran Turismo’s availability in the game itself, though it’s likely to coincide with its appearance at the Frankfurt motor show on September 17.