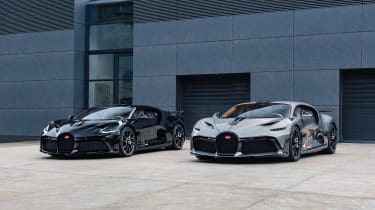 Following the reveal of customer specifications in May, Bugatti has now disclosed images of the very first cars to roll off the production line. Although the model shares its chassis and powertrain with the Chiron, all-new bodywork and a re-fettled chassis have, according to Bugatti, been designed to make the Divo a sweeter-handling hypercar.

Two years after the Divo debut in August 2018, the first of the 40 examples have been handed to their owners at the marque’s facility in Molsheim, France. Stephan Winkelmann, President of Bugatti, said: ‘The Divo marks a milestone in Bugatti’s history spanning over 110 years. The Divo will now enter our history books alongside the cutting-edge Veyron and hyper sports cars.’

Buyers of the Divo have almost entirely free rein when it comes to customisation, ranging from bespoke paintwork, to entirely new leather, and custom components inside and out - some options can take months, even years to develop. Anne Beynat, sales coordinator at Bugatti, said: ‘Customers often have their own ideas, such as family crests, national flags, their own logos or special colour schemes. We then try to implement the ideas in technical terms.’

One look at the Divo and it’s obvious that it could only be a modern Bugatti. However, compared to the sleek and sophisticated Chiron, the Divo takes a more menacing approach, with all-new carbonfibre bodywork that’s studded with ornate aerodynamic detailing. 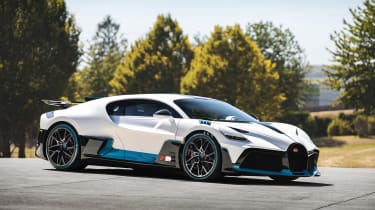 The new aesthetic starts with the ‘Bugatti line’. On the Chiron the iconic C-shaped line contains the cabin within its unbroken sweep. On the Divo, however, Bugatti has raised this line to halfway up the door, giving Bugatti’s designers the ability to integrate more complex groundwork aero skirting around the car.

The aggressive aero is most prominent on the front end, where a wider horseshoe grille dominates. The lower, stealthier nose might also initially look like its missing its headlights, but they now reside in a tiny 35mm shadow gap beneath the new daytime running lights, which stretch their way back up the front wings. At the light’s termination points are new 911 GT3 RS-like louvres.

Moving up and over the cabin, the roof now incorporates a wide but shallow NACA duct, split by a blue-coloured centre seam that recalls the weld seam that defined many historic Bugatti models, such as the Type 57S Atlantic. The carbonfibre that is exposed has been finished with a blue tint in the resin, but owners will be able to specify their own combination of colours.

The rear design takes a similar approach to the Chiron in having a fairly open tail to release the masses of heat being produced by the powertrain. The biggest design difference is the replacement of the Chiron’s distinctive full-width lightbar (milled from a single, giant piece of aluminium, no less) with a new, 3D-printed mesh that the taillights ‘bleed’ into. The effect is not dissimilar to that on the rear of the Aston Martin Vulcan. The Divo’s rear aero is also less subtle than the Chiron’s, as the wing no longer fully retracts into the rear bodywork. As a result, the new stacked wing is 23 per cent wider, contributing to the extra 90kg of downforce produced by the Divo. Overall weight has been reduced by 35kg compared with the Chiron, although at 1995kg you still wouldn’t call the Divo a lightweight. 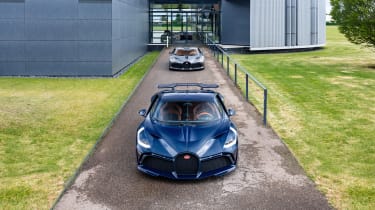 Under the new carbonfibre skin is the same 7993cc quad-turbocharged W16 engine, connected to a Ricardo-built dual-clutch automatic gearbox powering all four wheels. Peak power is rated at 1479bhp at 6700rpm, with 1180lb ft of torque available across an astonishingly wide 2000-6000rpm powerband. Bugatti quotes a 0-62mph time of 2.4 seconds, but the top speed is limited to 236mph – because the Divo lacks the ‘Top Speed’ mode that can lift the speed limiter by a further 25mph on the Chiron.

Inside, much of the Chiron’s interior is carried over. The example picture here features an asymmetrical colour palette of light blue and black Alcantara. There’s a wider use of satin-finish carbonfibre, as well as a dark anodisation on the interior’s usually bright aluminium highlights around the steering wheel and dash.

Although many Divos will doubtlessly live their lives squirrelled away in private collections, all 40 vehicles will be homologated for road use. Each one set its respective owner back around €5m (approx. £4.4m).

BMW’s next M4 coupe promises much, but will it deliver? Here’s everything we know so far
Visit/best-cars/15315/best-cars-to-buy-for-ps20000-evo-garage