Five grand doesn't buy you much on the new car market – in fact, it doesn't even buy you a Dacia – but it can go a lot further than you think when it comes to buying a performance car, from used supersaloons to proper sports cars, hot hatchbacks and sports saloons.

We have depreciation to thank for that – a depressing fact of life for new car buyers (unless you put your name down on the list for a 911 R) but a gift from the gods if your budget is a little lower, dragging down some hugely desirable cars as they're superseded or rendered obsolete

The choices below are the individual selections of the evo staff, and very much not an evo-recommended list of cars you should actually buy. Though you'd be crazy to miss out on some of these, and you could in theory buy all of them for the price of a modern hot hatchback

Obviously when buying any used car you want to make absolutely sure you do as much research as possible beforehand. But this far down the food chain, be extra vigilant. We've made a few suggestions with each vehicle as for what to watch out for. 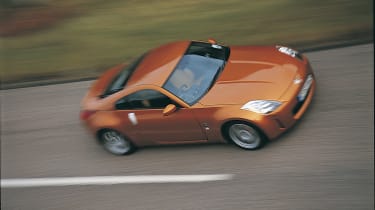 Five grand is a decent wedge of cash for an evo car, isn’t it? I thought it was, until I started looking and was greeted with a page of five-cylinder Focus STs, Astra – and Zafira – VXRs and BMW Z4s with engines a couple of cylinders short of being interesting. Worthy evo cars one and all, but hardly the stuff of blood-pumping excitement.

Still, there’s always Nissan’s 350Z. Lusty 3.5-litre V6, rear-wheel drive, looks that have stood the test of time remarkably well and its rough-around-the-edges character appeals so much more than the near perfectly mannered Mk5 Golf GTI that costs similar money

For £500 under our budget you’ll find imported examples with around 100,000 miles and for a similar amount over budget UK cars with similar mileage. GT Packs are common and the 276bhp V6 is still considered bombproof from a mechanical point of view. Clutches need replacing every 40,000 miles but, this aside, rear-drive, six-cylinder coupe action doesn’t come much more affordable. 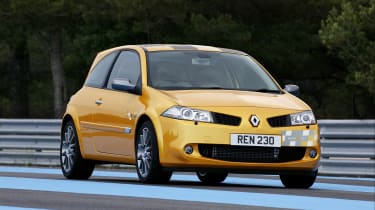 An evo-approved car for £5000? Look no further than an RS Mégane. For this budget you can get one of the very best, too: the convolutedly named Renault Sport Mégane 230 F1 Team R26.

Built to celebrate Renault’s success in the 2005 Formula 1 drivers’ and constructors’ championships, it is also the car that spawned the ‘front-wheel-drive GT3 RS’, the Mégane R26.R. The standard R26 may not be quite as special as the roll-caged, plastic-windowed and radio-less .R, but it does have the benefits of, well, glass windows, a radio and some rear seats – and, for that matter, sensible front seats, a passenger airbag, headlamp washers, front fog lights, a rear wiper and some soundproofing

You could almost call it a ‘front-wheel-drive GT3-lite’, then, except it’s 125kg heavier than the track-focused limited edition. But it does have the same 227bhp engine and limited-slip differential, plus two more ingredients that feature on some of the very best Renault Sport models: a Cup chassis and a smattering of stickers. The former is further honed beyond that on the F1 Team’s 225 Cup forerunner, while the latter may not be present if the person who originally bought the car was daft enough to delete them.Prices start at around £4k for an R26 with 80,000-plus miles on the clock, but don’t let that mileage put you off, as these things are hardier than the clichés about French build quality might lead you to believe. See our comprehensive buying guide in evo issue 208 for confirmation of that, and for more info on what to look out for. 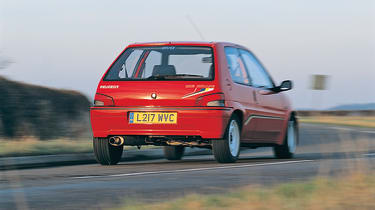 106 Rallyes had been pocket change for years, and therein lies part of the problem with buying one now. First of all, you really want to find one that’s as original as possible. These may be low-powered cars, and cheap when new – the Series 1 was just £8995 back in the day – but they’re very rare (just over 1000 S1s came into the UK, and only 500 S2s) and actually very special.

Which one to go for? Personally, I’m always attracted to the original, partly because I owned one many years ago, and partly because it’s that bit more distanced from the regular 106 than the S2. The unique little 1294cc single cam ‘four’ revs to 7400rpm, producing 100bhp and just 80lb ft of torque, and was chosen to enable the car to fit into the right category for international rallying. In fact, there’s a homologation plate under the bonnet, just one of the many hardcore features about these cars. Others would be gearing so short the car pulls over 4000rpm at the legal motorway limit, lightweight Michelin steel wheels, uniquewheelarch extensions, oil temp and level gauge, and a non-airbag steering wheel. Rarely, too, have stripes looked so good on a car.

So while 0-62mph in 10.6sec sounds feeble in today’s currency, with just 826kg to lug around there’s never a dull moment, especially when the road turns twisty. Series 2 cars benefit from a larger, less peaky 1.6-litre engine with 103bhp, and disc brakes on the rear axle, unlike the S1’s drums.

The biggest issue, after finding a car with its original engine and ’box, is rust; there are many corrosion hotspots, and it can easily write a 106 off that looks respectable on the outside. Watch for tired suspension and oil leaks, too. In fact, beware of just about everything. It’ll all be so worth it though. 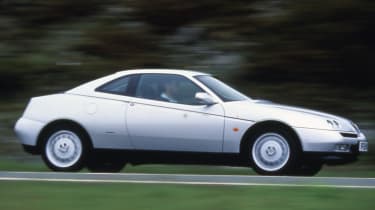 There are almost certainly more sensible cars to spend five grand on, but having already owned two of the cars I’d otherwise recommend – a first-generation Mazda MX-5 and a Peugeot 106 Rallye – I’d rather plump for something a little different. Different is something the GTV does very well indeed, but having grown up reading about them in car magazines, I’m aware there’s far more to the GTV than just its styling, too.

Alfa offered a small selection of four- and six-cylinder engines while the GTV was on sale, and £5k should cover any of them – either the 2-litre Twin Spark or later JTS, or the 3-litre or 3.2-litre Busso V6s. You’ll undoubtedly get a nicer example of the four-pots than you will a V6, but pretty decent examples of the latter still seem to exist in this price bracket.

They’re better-built and less problematic than Alfa’s reputation would suggest, but four-cylinder cars still need religious cambelt and water pump changes at 36,000 miles, and V6s earlier than the quoted 72k too – a £500-plus job. Twin Spark units can also use oil, so regular checks are wise. Front and rear suspension wishbones can cause problems, but are improved by using uprated bushes.

Rust isn’t a huge issue though, while interiors generally wear well. The chassis won’t feel as impressive now as it did back in the mid-’90s, but lively steering and responsive engines mean there’s much more to the GTV than the usual Alfa tropes of ‘character’ and ‘soul’. 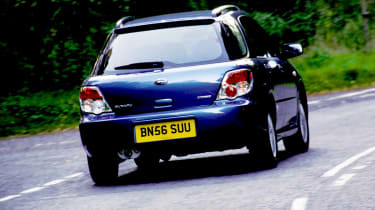 There are plenty of tempting cars that you don’t get very much of for £5000, but you can get quite a lot of Subaru Impreza. The golden age of the rally replicas may be fading in the memory like the ink on your Impreza v Lancer Evo bedroom wall posters, but it only means that the used market is awash with all-wheel-drive turbocharged Subarus in varying states of repair.

The ‘eyes’ have it when we’re talking second-generation Imprezas and you can get an original ‘bugeye’ Mk2 WRX with a few miles on the clock, that hasn’t been too badly messed around with, for under £3k. The ‘blobeye’ facelifted models (2002 on) are a bit more money for a serviceable one, and the ‘hawkeye’ facelift, that arrived in 2005, exchanging the 2-litre turbo boxer engine for the 2.5-litre unit, is close to our £5k limit. Decent Mk1 cars and any of the STIs or special editions are now well out of this price bracket.

Though undoubtedly rough around the edges, the Mk2 Impreza WRX offers sturdy mechanicals and B-road performance potential that’s still hard to beat at the price. Go for a 2004 model and you’ve got a 222bhp car that’ll get to 60mph in 5.6sec (even an STI only offers 262bhp for a 5.2sec sprint) with fine balance and traction in abundance. The ride isn’t too bad on these, but turbo lag and the exhaust drone at a cruise are bigger issues. 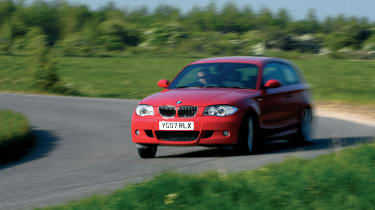 How good does the original BMW 1-series look right now? Compared to its bloated, front-wheel-drive self in 2020, the notion of a small rear-wheel-drive BMW hatchback sounds better than ever. Unfortunately, the original E81 always had issues with a range of pretty dire petrol engines in its early form, except that is for the 130i.

The 265bhp naturally aspirated 3-litre straight-six is crisp and responsive and matched to a typically notchy but satisfying six-speed manual. We’d avoid the slurry auto (as good as it may be for an auto) and despite its rear-drive chassis, the E81 1-series’ flabby body control and lack of a limited-slip diff make this more of an eight-tenths performance car than an out-and-out trackday tool

Thankfully, a decent 130i doesn’t have to use up all of our £5k budget. Get creative with some modifications, focusing on the suspension and rear axle, put some decent brake pads on it and the inherently sweet chassis can shine through though. Just don’t go sticking on any carbonfibre badges or tinted film over the tail lights. That’s tacky. 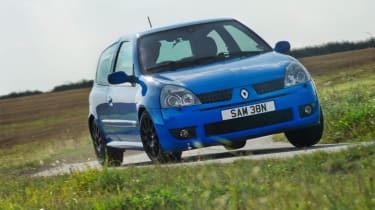 Renault has built some of our very favourite driver’s machines over the years, spanning the 5 Turbo to the excellent Clio Williams, and not to forget, the 182 Trophy. The limited-run Clio is a hatch we’re still fond of to this day, with (front) suspension you’d expect to find in the arches of a BTCC racer and an excellent powertrain to go with it.

Though frustratingly volatile, prices haven’t quite dropped low enough for it to fit into this category. However, the standard car on which it’s based most certainly does. Boasting the same 2-litre naturally aspirated Mecachrome-developed four-pot, the standard 182 was launched in 2004 with an output of 180bhp, enough to match even some of today’s supermini offerings.

A mere £2000 will get you in the door, but stumping up an additional few thousand for the Cup additions is highly recommended. Although not the Sachs set-up of the Trophy, you’ll receive a 10mm drop in ride height from standard thanks to the firmer Cup suspension, alongside a new front splitter, rear spoiler and Anthracite wheels.

Unlike the Trophy, prices for the 182 have all but stagnated, meaning you can pick one up today without the fear of it losing a chunk of value over your ownership period. For under £5k, I’m not sure there’s anything else that can offer more fun