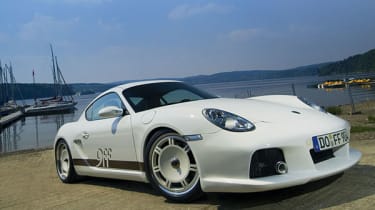 Once viewed as Philistines for crimes against perfectly good sports cars, these days tuning companies (or at least the best ones) represent a credible alternative to the mainstream. Some of them have even been embraced by the establishment - AMG is now an official affiliate of Mercedes-Benz, Brabus has official connections too, and Alpina enjoys a close relationship with BMW.

Still unconvinced? Well, consider that in an independent test by a German magazine, a 4.1-litre 414bhp version of the 9ff-converted Porsche Cayman that you see pictured here was a second quicker around VW's test track than the recently launched 997 GT3.

Unfortunately that same magazine, according to the diagnostics system, spent a good part of the day over-revving the engine. Unsurprisingly, it went bang. So rather than the 4.1-litre (modified from a 3.8-litre 997 unit), today we're driving 9ff's 'maximum performance' conversion on the 3.4-litre Cayman S lump, hastily dropped into the CR-42 demo car while a new 4.1 is being built.

Even this 'lesser' engine develops 345bhp - up from 291bhp, with torque rising from 251 to 262lb ft - thanks to a raft of modifications that include bigger valves, ported heads, lightweight pistons, new camshafts and replacement inlet and exhaust manifolds. The result is an engine that encourages a near-permanent right foot/carpet connection. Soar past the 4500-5500rpm sector of the rev counter (where there's a skull-cracking boom that you really wouldn't want to subject your eardrums to for too long) and the engine note is crisp, precise, mechanical, insistent.

There's savage acceleration to accompany the music, delivered with the sort of zealous throttle response that you only get from a hyperactive normally aspirated engine. Subjectively it feels on the pace with, or even slightly in front of, a 911 Carrera S, but we'd need a stopwatch to be sure.

The 9ff Cayman is predictably lower and stiffer than standard, yet it still rides reasonably well. However, because the chassis has been set-up with a heavy track-use bias, bumpy roads have it weaving hither and thither when you accelerate hard. There's a limited-slip differential, too, just to keep you on your toes.

The brakes - GT3 discs grabbed by 996 Turbo callipers - would benefit from more initial bite as a confidence-booster at moderate speeds, but when you're gunning the 9ff they're powerful and fade-free. And it's when you're using the car like this, to extremes, that the benefits of the Cayman's mid-engined layout take on a fresh clarity. Compared with a 911, the smaller Porsche's back end is less of a rogue element, the chassis having a more natural balance when you're into a corner.

The 9ff conversion on the Cayman is blemished in a number of ways, and that mid-range cacophony could easily dissuade you from using it every day. On the other hand, the engine's manic top-end energy invigorates the chassis in a way that Porsche's standard powerplants can't quite manage, and the race rawness of the entire package seems to suit the car extremely well.