British 911 rival gets a paddle-shift semi-manual 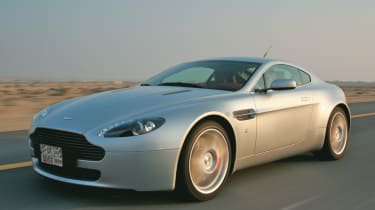 We knew all along that the V8 Vantage would soon get some form of clutchless gearshift option. But would it be a perked-up version of the DB9’s ZF six-speed automatic – Jaguar’s XKR shows how convincing that gearbox can be – or a robotised version of the existing Graziano manual?

Well, it’s the latter. I didn’t know before driving the new V8 Sportshift that variations of the Graziano are also used by Ferrari and Maserati, but with that knowledge and the Vantage’s hardish-core attitude vis-à-vis the DB9, the outcome is obvious. Apply the same hydraulics and Marelli electronics that make the Italians into F1s, Cambiocorsas and DuoSelects, and the V8 Sportshift is the result.

Less predictable was the climatic twist that accompanied our Sportshift drive in Bahrain and the concurrent 24-hour race there in which a near-standard (and manual) V8 came home eighth. On day two it poured. Which meant our post-race fling around the slippery circuit would be an especially good test of the Sportshift’s clutch and throttle co-ordination as I downshifted into wet corners, hoping to avoid destabilising drag on the rear wheels. I could add my own throttle-blip, of course, but the idea is that the transmission does it for you.

Which it does. The blip isn’t as flamboyant as an Italian one as you pull the left-hand one of the two magnesium paddles (they’re fixed, like those of the Italians), but it synchronises perfectly. On a track the Sportshift works very well (as does the entire Vantage, a wonderfully focused yet forgiving car), although the upshifts aren’t the smoothest when you’re trying hard, even if you lift momentarily.

And on the road? Dave King, the V8’s programme manager, says there are a few software tweaks to do before the Sportshift’s launch in March. They will, he says, address the shunt and snatch that happens as you come to a stop, caused by the clutch disengaging too late, and with any luck will also fix the pause’n’surge that plagues the first-to-second shift unless you’re very deft with your throttle modulation.

Default mode is Sport, but pressing a button engages Comfort, which slows and smoothes the shift. Pressing the D (Drive) button turns the Sportshift into an automatic, which works quite well if you’re crawling in traffic (a ‘creep’ function aids controllability here and helps with parking) but can surge unpleasantly on the move unless you can second-guess the shift points and ease the throttle before the electronics do it for you too abruptly. It’s actually worse in Comfort because the torque interruption is longer. It’s annoyingly slow to select reverse – by facia button – too.

Sport manual is the happiest mode, and once into second it’s possible to be completely smooth while enjoying near-instant shifts. The system will always upshift on touching the rev-limiter, even in Sport, but with the ESP switched off it allows a very satisfying wheelspinning start simply by flooring then controlling the throttle.

Aston Martin expects most future Vantages to be Sportshifts, especially the imminent Roadsters, but a few laps in the well run-in 24-hours racer reminded me how sweet the manual can be. We’ll reserve judgment until we drive the final production Sportshift.