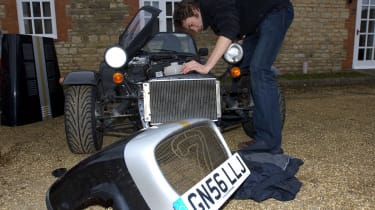 The Caterham has been a little unwell this month. Not the Norovirus, just your usual winter cold – running a temperature, sniffling fluid out of its nose, that sort of thing…

Because I’ve grown up in an age when engine bays generally resemble some sort of plastic gladiatorial breast-plate, I’m not the most mechanically minded person. Mostly, cars these days are designed not to be tinkered with. Modern BMWs don’t even let you check the oil anymore. ‘You wouldn’t understand me,’ they seem to say when you lift the bonnet. ‘You’ll need to pay money – and probably lots of it – if you want to know what’s wrong.’

The Caterham is different. A couple of clips and off comes the bonnet. Then undo some Dzus fasteners (this time with the help of a screwdriver or possibly a thin-edged coin such as a two pence piece) and off comes the nose as well. Now you have all the internals of the car laid before you, asking to be interrogated.

The 150 had begun to show a little feverish on the temperature gauge, and oil pressure was down slightly as well, so the first thing to do was to dip the stick and check the oil level: fine. Next up was the suspiciously empty-looking coolant bottle. That would explain a few things. Fill up to the mark with water and antifreeze, then check all around for any obvious groundward trickles and, on seeing none, drive the 11 minutes home on account of it now being dark and cold.

The temperature gauge was back to a more normal position on the drive home, but inspection next morning showed the level in the bottle had dropped a little again, so after replenishing it again I started the engine and allowed it to warm up with all the panels off. Once everything was running through the system, it didn’t take long to discover that things were a little too porous around the top of the radiator. It’s nothing major and I can still drive it if I keep the coolant topped up, but a trip will have to be made to the factory. They’ll fix the speedo whilst I’m there, too.

Best drive this month was a 4am Monday morning dash to Stansted. It’s not usually something I’d relish but the air was so bracingly cold that I soon forgot I was recently asleep and my cunningly devised/accidentally discovered cross-country route involves a decent number of empty B-roads and roundabouts to keep everything interesting. Heater blasting ferociously as we headed towards a lightening easterly sky, it was wonderful.

Part of the reason was that the 150 is proving a loyal oversteer friend. There’s a healthy amount of grip from the lightweight Avon CR500s and wide track but this car has the narrower 175/55x13 rear tyres, so it’s easy to flick the end you’re sitting on out of line. And when it does let go it’s sublimely controllable, which means it’s also great fun. Almost as satisfying as diagnosing a leaky radiator.