Ahead of the launch of a documentary following its development, Chevrolet’s mid-engined Corvette laps the Green Hell in under 7min 30sec 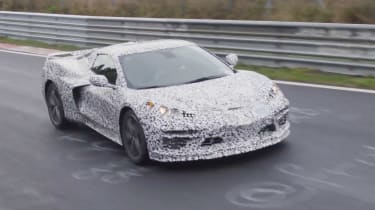 Production of Chevrolet's first mid-engined Corvette commenced earlier this month at GM's Bowling Green Assembly Plant in Kentucky, USA, and new information reveals its capabilities around the Nürburgring. There's no word on when the UK will see its first cars as of yet, but right-hand-drive variants are scheduled to enter production in due course.

Piloted by British Le Mans driver Oliver Gavin, a development C8 Corvette equipped with the Z51 Performance package lapped the Ring in 7:29.9, over ten seconds quicker than the more focused C6 Z06 from two generations before. For comparison, 7:28.71 was the time we recorded in a Porsche Carrera GT, and the hardcore Camaro ZL1 set a near-identical time of 7:29.6. With hybrid assistance and forced induction in the pipeline, might the Chevrolet aim for Lamborghini’s 6:44.97?

Though its power plant is now mounted mid-ship as opposed to ahead of the driver, a naturally aspirated V8 and a handful of styling details ensure the new Stingray stays true to the brand. Chevrolet says the design has been inspired by racing, and it’s not hard to imagine the new car, resplendent in yellow paintwork, mixing it at the top of the GTE grid at Le Mans.

It makes sense to start with the engine, given where you’ll now find it. The new LT2 unit displaces 6.2 litres, develops 495bhp, and 470lb ft of torque, when equipped with the performance exhaust. That’s the most power and torque an entry-level Corvette has ever had, and it’s also achieved breathing at atmospheric pressure – the engine may have moved, but it remains naturally aspirated in base form.

That makes it somewhat unique in the market, and while in some respects the LT2 seems like a blast from the past – it’s an overhead valve design, using pushrods, and has only two valves per cylinder – it’s thoroughly modern in others.

For a start, the OHV layout makes it light and compact (two increasingly important qualities), but the Corvette also has a dry sump for the first time. It also has variable valve timing and cylinder deactivation, and as a benefit of the mid-engined transaxle layout, the engine sits an inch lower than the V8s in the previous Corvette.

Chevrolet hasn’t revealed a top speed just yet, but 0-60mph comes in 2.9sec for the Z51-equipped car, 3.0sec without. The quarter-mile comes in 11.2sec, crossing the line at a respectable 123mph. 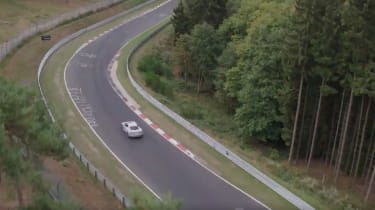 The LT2 is also attached to the Corvette’s first dual-clutch transmission – the sole option available. This will no doubt turn some customers away, but Chevy promises the Tremec unit has been perfectly tuned to the LT2, and vice-versa, while a limited-slip differential is standard.

And of course, the new layout should transform the way the Corvette drives. The last few generations had already done plenty to dispel any notions the car was style or power over substance, but the new chassis promises a lower centre of gravity, increased agility, more lateral grip (almost 1 G on Michelin Pilot Sport ‘all-season’ tyres), an improved steering ratio and more traction.

There are double wishbones at each corner, while the Z51 package brings magnetic ride dampers, adjustable via different driving modes. The package also gives the Corvette even more grip, swapping the all-season tyres for Pilot Sport 4 S rubber – 305 section at the rear on 20-inch wheels, 245s on 19s at the front – and adds bigger brakes and a specific axle ratio.

And so to the styling. Spy shots didn’t quite do the car justice, making it look more generic than the production car has turned out, but it’s still a busy shape. Luckily it’s easily identifiable as a Corvette, carrying on much of the detailing of the outgoing, front-engined C7 model. It’s hard to call it pretty, and photos shrink its size somewhat – the C8 is around 4.6m long and 1.9m wide (and weighs in at 1530kg before fluids) – but it looks like a Corvette, and that’s probably enough for many.

The cockpit looks like a step forward too. Like several Aston Martins the wheel has a squared-off profile that may irk some, and with only two spokes it’s an unusual design too. Other strange choices include the enormous centre tunnel – no longer strictly necessary given the mid-engined layout, but designed to form most of the car’s strength, so large sills aren’t required and don’t hinder access – and the enormous in-line row of buttons for various interior functions. 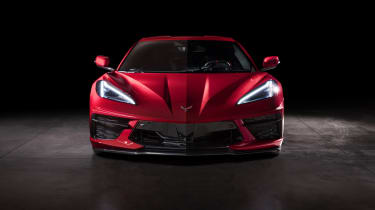 But the design is about as driver-centric as cars get, the digital instruments still resemble those of previous Corvettes, and the quality looks like it’s in a different league from the C7. The car’s new layout should also make for a very different feel. Chevy says the driving position is 16.5 inches further forward than before, and forward visibility should be better.

Of course, UK prices will be inflated somewhat, but perhaps the most impressive news is that prices for the Corvette Stingray start at under $60,000, or about £46,000 at current exchange rates.

American cars have always been inexpensive in the American market, but when you consider that that money is less than several of the highly rated sports cars we’ve seen in Europe over the last few years – including the new Toyota Supra, BMW M2 Competition, Porsche Cayman T and Alpine A110 – it’s clear the new Corvette represents remarkable value for its high performance. 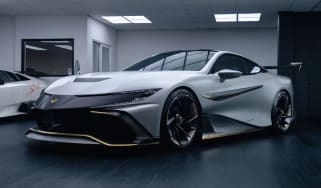 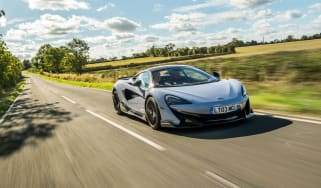 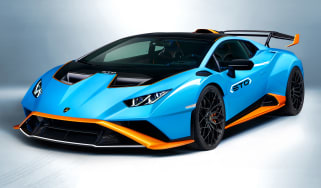