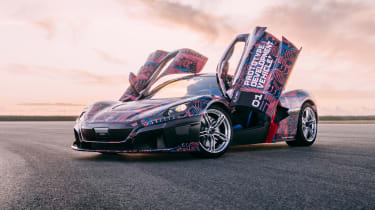 Following its reveal at the 2018 Geneva motor show, Rimac has revealed that testing is well under way for its second and most ambitious hypercar. The Croatian marque will first display the improved, production-spec car (complete with a new name) at the 2020 Geneva show, before the first customers take delivery in late 2020.

A follow-up to Rimac’s original car, the Concept One, the C_Two is a clean-sheet design, carrying over nothing more than ideas and knowledge from its predecessor, and using a completely new platform and drivetrain.

It’s also slightly larger than before, hopefully correcting one of our few criticisms with the first car – cabin space – and features Rimac’s own autonomous and connected technology, making the C_Two a proof-of-concept showcase for the large number of major global car makers that Rimac calls its clients.

The brand recently disclosed that following years of virtual testing through millions of simulations, the model has now entered the real-world testing phase, putting the all-electric hypercar through its paces at none other than the Nardò testing facility in Italy, used by the likes of Porsche and Bugatti. Initial testing began in spring this year, putting the first cars through vehicle dynamics, powertrain, passive safety and crash tests.

This comes ahead of the pre-production phase next year, when 17 examples will be produced for global homologation and more intensive testing, such as chassis rigidity and high-performance autonomous driving development.

The C_Two will immediately position itself as one of the quickest-accelerating and fastest production vehicles ever made when it eventually hits the road, with a 0-62mph sprint of just 1.85sec (using a US-style one-foot rollout), and a top speed of 258mph. In the interim, it’ll have covered the 0-100mph measure in 4.3sec, the quarter-mile in 9.1sec, and passed 186mph (300km/h) in 11.8sec – Bugatti’s Chiron manages the latter measure in around 13.6sec.

But Rimac positions the C_Two as much as a grand tourer as it does a hypercar, so there’s also a long range of over 400 miles from a full charge. The battery pack is a 120kWh lithium manganese nickel unit – a chemistry that company founder Mate Rimac tells evo provides the best balance between delivering huge power (1.4 megawatts of it) and suitable longevity – and can be recharged to 80 per cent capacity in as little as 30 minutes, using the car’s 250kW charger.

A hefty cooling system (using seven radiators) allows the car to manage battery temperatures for optimum performance. Theoretically, the car can run two flat-out laps of the Nurburgring with very little degradation in peak performance – in contrast to cars such as the Tesla Model S, whose quick Ludicrous mode acceleration runs require a full charge and lengthy conditioning procedure for just a few seconds of flat-out performance.

Rimac hasn’t scrimped on the car’s friction braking system either – enormous 390mm Brembo carbon-ceramic rotors fill each wheel rim, gripped by six-piston calipers all round. The company doesn’t yet have figures for how much energy the motors can recuperate under regenerative braking, though this will vary depending on driving mode. Rimac says it is also working very hard to deliver a natural-feeling brake pedal – something that’s very difficult to achieve when blending regenerative and friction braking. 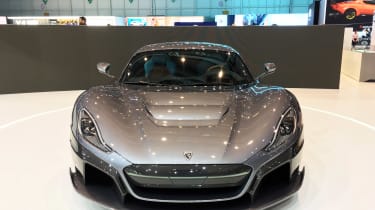 The source of the C_Two’s huge performance is a four-motor drive system, one per wheel. The front wheels each get a single-speed transmission and each of the rear wheels has a two-speed gearbox using a carbon clutch. It’s this gearing, and the 1888bhp combined output of the powertrain that allows it to hit such a high top speed, while 1696lb ft of torque covers the startling acceleration figures.

Because there’s a motor for each wheel, the C_Two features R-AWTV, or Rimac All-Wheel Torque Vectoring, constantly varying the output of each motor according to driving conditions. The system also negates the need for conventional ESP or traction control systems as both functions can be handled in real time by the motors.

The ability to constantly vary the motors’ output also means drivers will be able to press a button or turn a knob to make the C_Two rear-wheel drive only. While this naturally won’t put the car’s entire output to the rear wheels (as each wheel is powered independently), it will give the car unique driving characteristics for those with a more flamboyant driving style.

Like its drivetrain, the C_Two’s chassis and body are all-new. It’s hard not to notice the new styling, which to our eyes isn’t quite as clean and sleek as before, but arguably looks more like a serious performance car and less like a vehicle from a small-volume manufacturer. Styling is the work of in-house designer Adriano Mudri, and builds on the Concept_One’s family look.

While we’d not often advocate for a car to grow larger compared to its predecessor, the Concept_One was small enough that driving it meant a tight squeeze even for drivers of modest height. At 4750mm long, 1986mm wide and 1208mm high, the C_Two is 202mm longer, 132mm wider and 10mm taller than before, but despite the larger battery (120kWh compared to 90kWh) it’s only gained 50kg – though at 1900kg the C_Two is still weighty for its size. 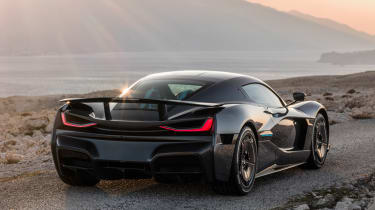 The car uses a carbon monocoque structure to which a carbon roof is bonded and carbon body panels are attached. The battery pack is integrated into the structure, while the rear subframe is also carbon, with crash structures being a mix of carbon and aluminium. Rimac’s efforts to make the car strong and safe (there are driver, passenger and side airbags too) aren’t mere lip service – the company is homologating the car for worldwide sale, so it needs to pass stringent crash regulations such as the USA’s rollover and large offset frontal impact tests.

There’s a flat floor to aid aerodynamics, with a rear diffuser and active aerodynamic elements on the exterior, notably the rear wing – which can act as an air brake. Rimac quotes a drag coefficient of 0.28.

For a car as quick as the C_Two, it’s a mark of Rimac’s use of technology that its cabin and features aren’t completely overshadowed by its performance. One technology sure to raise eyebrows is the inclusion of level 4 autonomous driving, and it’s a system Rimac has developed entirely in-house – only the physical sensors used for the tech are brought in from outside.

It’s the way that Rimac is using it which is most interesting, though. A 'driving coach' function is integrated into the car, which can provide you, video game-style, with ideal racing lines, braking, turn-in and acceleration points, and other useful data around your circuit of choice – helping you build up your skills just as a real instructor might. Mate Rimac even suggests it could advise you to brake a little earlier should you be tackling a hill climb at speed… 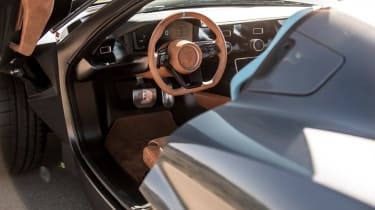 Entry is through a pair of butterfly doors, which cut into the roof to improve access. You won’t need to blip a key to open them either, as facial recognition technology unlocks the car as you approach. Or not, if it detects you’re Richard Hammond. The artificial intelligence tech also allows you to start the car without a key, and even monitors your mood, adapting the car’s systems accordingly; it can play soothing music or soften the ride if you’re in a bad mood.

The cabin design itself features three high-resolution TFT screens to relay information to the driver. The layout appears crisp and modern, and like the exterior, feels like it’s moved on a generation or two from the first car – the mark of a company that’s gone from having eight employees at the start to over 350 now, with greater expertise and slightly more workable budgets.

It’s difficult to know which aspect of Rimac’s C_Two is most impressive. The performance is undoubtedly remarkable, but so are the efforts of such a small company to ensure it can be sold globally, which means meeting rigorous regulations and crash test requirements for places such as the United States.

You could even make a case for the autonomy and infotainment systems – all developed in-house, of course, because Rimac isn’t just a car company but a technology one, creating and supplying solutions to global OEMs. The C_Two is as much a shop window for Rimac’s abilities as it is a car that, as founder Mate Rimac puts it, is aimed somewhere between the LaFerrari and Bugatti Chiron.

Talking with Mate Rimac before the Geneva motor show, it was also encouraging to see just how well the company is developing – and that the C_Two will be a fully rounded product, not focused solely on performance, but on being a great car to drive, too. ‘This is the car I wanted the Concept_One to be from the start,’ he tells us.

Better still, Mate Rimac has an even greater desire to one day produce a car that isn’t taking part in the performance arms race with Bugatti, Koenigsegg et al – the new Alpine A110 and products from Lotus both came up in conversation. A car packing Rimac’s electrical and technological expertise focused on light weight and interactivity? Sign us up.