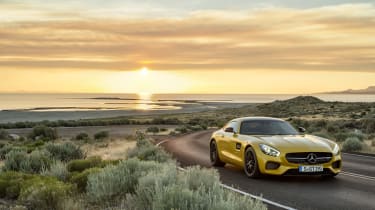 Back to the more obvious rivals now, the Audi R8 has taken Porsche on at its own game. Fast, comfortable and usable, the basic 4.2-litre V8 R8 is a very capable car indeed. It is probably the second car (after the 911) that Mercedes considered when it was developing the AMG GT, and one of the most influential cars in this sector overall.

Producing 424bhp and reaching 62mph in 4.6sec, the £93,735 four-wheel drive two-door is right up there with the 911, offering the same level of day-to-day usability and practicality. It’s only on the limit where again the Porsche wins, but thanks to the Audi’s superior traction and lovely manual open-gate shift six-speed ‘box, the R8 brings plenty to the table to make it a very viable alternative. Even seven summers on many would say it’s a great looking car, and with a new model due in the new year, the R8 could become an even stronger force.