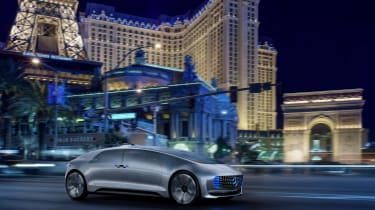 Las Vegas’ CES 2015 (Consumer Electronics Show) has confirmed the New Year will be another for innovation as several automotive manufacturers reveal ultra high-tech products. With autonomous and artificially intelligent cars, touch-screen keys and in-car web connectivity all featuring, we look over the show’s most enticing reveals and consider their effect on cars of tomorrow.

Audi arrived in Las Vegas in style as its employees were quite literally driven there by an Audi A7 concept. The autonomous A7 travelled 550-miles from San Francisco to safely arrive at CES 2015 without any hiccups.

Audi has labelled the technology used on the A7 concept as ‘production ready,’ confirming this is far more than just a demonstration fit for sci-fi. Instead, it borrows long-range sensors from current Audi production cars, normally used for adaptive cruise control but adjusted to see a wider scope of surroundings with side and rear sensors.

Add a LIDAR laser scanner, four cameras and a 3D camera, and the A7 is not only able to see its surroundings, but also project them in full 360-degree view onto the interior screen.

In order to drive itself the A7’s sensors all feed into a computer that controls throttle, brake and steering inputs. It works at speeds of up to 70mph on open highways and motorways, but on tight, urban roads, a human driver is required.

Despite being in latter stages of development, it seems unlikely we’ll see an automated A7 on roads before the turn of the decade.

Audi isn’t the only carmaker to bring a self-driving car to CES 2015, because German compatriot Mercedes has brought its F 015 Luxury In Motion concept. Though its nametag sounds like a concoction of fighter-jets and sofas, the F 015 Luxury In Motion points towards a future of lightweight, autonomous hybrids.

Powered by a plug-in hydrogen and twin-electric motor powertrain, the F 015 – which is clearly in far earlier stages of development than Audi’s self-driver – is capable of covering an impressive 684-miles at the equivalent of 141mpg. It produces 268bhp and can sprint from 0-62mph in 6.7sec, all without emitting a thing from its tailpipes.

Mercedes has pitched the F 015 as a ‘mobile home’ rather than pure car, with its long wheelbase and short overhangs providing a large amount of space for a lounge-like interior.

Dr Dieter Zetsche, Chairman of the Board of Management confirms: ‘anyone who focuses solely on the technology has not yet grasped how autonomous driving will change our society. The car is growing beyond its role as a mere means of transport and will ultimately become a mobile living space.’

The ‘one-box design’ Merc drives itself with a similar selection of cameras and sensors to Audi’s creation, comprised of stereo cameras and all round sensors that monitor surroundings to send inputs to the car’s controls. It can even project a zebra crossing onto the road ahead to allow pedestrians to safely cross.

With its ability to ‘learn’ thanks to artificial intelligence, its carbonfibre-reinforced plastic, aluminium and high-strength steel construction (which makes it 40 per cent lighter than the current aluminium based Mercedes S Class), and complex plug-in hybrid hydrogen propulsion system, it’s unsurprising to hear Mercedes call the F 015 Luxury In Motion the most advanced concept it has ever created.

Not wanting to miss out on the autonomous buzz, Hyundai has demonstrated its own semi-autonomous and augmented reality head-up display at CES 2015.

Appearing to be not too dissimilar to JLR’s recently unveiled HUD, Hyundai’s system projects live information into the driver’s eyeline to provide information on road conditions, the car’s running conditions, street markings, route guidance and even heart rates of passengers. It even adds gesture control for 'touchless' commands.

The system can also monitor whether the driver becomes debilitated due to something like a heart attack, and can safely bring the car to a halt at the side of the road before calling for an ambulance.

It's not just carmakers who’ve turned up with ideas for an automated future, because Nvidia has brought its Drive concept technology to CES 2015. Looking through 17-million pixels of live information from 12 high-res cameras, the system can view a car’s full 360-degrees of surroundings to then control functions such as auto-parking. It can even self-drive around carparks and garages back to an owner.

The cameras can also project a top-down 360-degree view of the car onto the infotainment system, helping drivers navigate through tight spaces. There’s opportunity for this live image to be shown on displays the length of the dash or alternatively across several screens.

Seemingly borrowing tech from stable mate Audi and its new TT, the VW Golf R Touch brings tablet and smartphone type touchscreen displays onto the Golf’s dash. The Golf goes one step further by adding gesture control too. It also seems to borrow its paintjob from Peugeot's 208 GTi 30th Anniversary ...

The displays are made up of three main touchscreens, offering infotainment, ancillary control and also a variety of background colours to match LED lighting across the cabin.

The Touch confirms that VW Group products will all likely receive intelligent touchscreen displays across their dashboards. Could we see a future of touchscreen Porsche and Lamborghinis projecting performance data across the cabin? We think the Touch suggests so.

Also demonstrated in Las Vegas are Apple’s CarPlay and Google’s Android Auto touchscreen tech. Their presence with Volkswagen at CES 2015 confirms VW models (and other VW Group cars) will feature the systems in a matter of months, integrating smartphones, tablets and smartwatches with touchscreen displays on current-gen dashboards.

2014’s motoring star, the BMW i8, is to receive a futuristic key fob to match its forward thinking powertrain. Integrating a tiny 2.2-inch touchscreen display into the fob, the new keyless entry fob enables drivers to access menus of live information when in or out of the car.

We expect the technology to be rolled out across a wider range of BMWs in the near future. Read about the key in more detail here.