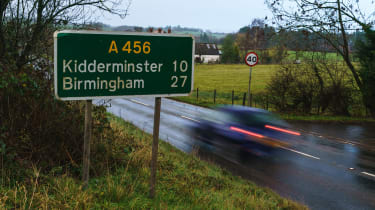 An overcast morning in the middle of a wintry Birmingham isn’t the most inspiring start for a great drive. But you know what? I don’t care. And for one very good reason: I have the key to a Ford Racing Puma, and doesn’t it just look so pugnaciously gorgeous, screaming rally refugee and commercial loss-leader in equal measure? There’s no substitute for widened bespoke metal panels, even if the company accountants are usually in tears afterwards.

It’s boisterously loud, stiffly sprung, torque-lite and ergonomically bizarre, but right this moment I’d not swap its familiar Ford turn-of-the-millennium ovoid key for anything, and given where we’re heading for, I’m even less likely to want to in about an hour’s time. The roads at our destination should be perfect for its compact footprint and inertia-free responses, not to mention the anticipation of revving out that traditionally fettled, enthusiastic little engine. 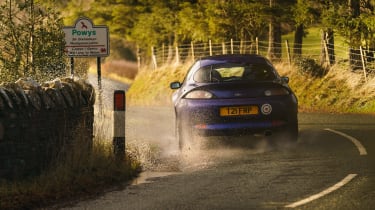 Our self-imposed half-hour transit time from the city centre leads us west and around Kidderminster, following the A456 until peeling off at Callow Hill in the direction of Cleehill and our first taste of B-roads. It’s here that the drive really begins, and I’m working the four-cylinder 1.7 hard – not that it’s having much effect. Compared with today’s effortless turbocharged engines, the Racing Puma’s approach to piling on speed is starkly different. Unless there’s 4500rpm on the rev counter it’s only interested in producing noise, but not so much forward motion at the same time. Above that it keeps building power as the limiter approaches; at last, an incentive to really let an engine get to work, and the requirement to stir the gearlever in support. You’ll want to, as well, because the delicately crisp shift action and closely stacked ratios are conducive to eking the most out of just 153bhp. There’s no dreary emissions- and consumption-biased gearing here.

It’s hardly fast with a capital F, but I’m not fussed. It’s not about arriving at the destination quickly, it’s about enjoying the process of getting there, and the FRP is really delivering. As we climb along the ridge past Doddington I swear you can see Bristol on a clear day, so panoramic is the view. Suddenly, the drudgery of city-centre motoring seems an eternity away, and I remember again the simple thrill of getting in a straightforward sort of car without fancy electronic gimmicks, and just driving for the sake of it. 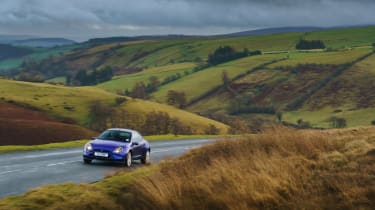 Even so, this is all just small-arms fire – much like the Puma’s exhaust on the overrun – compared with the full-salvo experience that’s coming up. Turn right when the A49 is reached, avoiding Ludlow, and take a breather during a quick slog north, passing over the River Onny and the train line before reaching the town of Craven Arms and hanging a left, aiming for the village of Clun and our furthest point west in Newtown, over the Welsh border.

Much of the next hour is simply brilliant, with the kind of roads and scenery that make you forget about time, place and the pressures of daily life, and just enjoy the simple, pure interaction of man and machine covering ground. It’s not as though you even need to be on a qualifying lap to enjoy it: you don’t. Linking vision with speed, it’s simply not possible to have that kind of commitment, but maximum concentration is a constant necessity because the road never gives up, and that’s the fun of it: undulating, mud-slathered asphalt past farms early on, then climbing through forests past Clun until an extraordinary vista across into Wales, then over the border and down an Armco-lined hillside that wouldn’t be out of place on the Monte Carlo Rally. 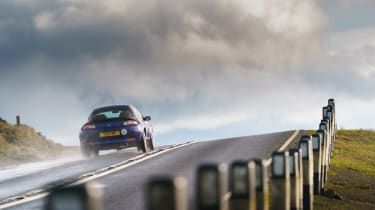 I can’t think of a better partner here than the Puma. It’s so delicate, the steering requiring the subtlest of nudges to change direction, faithfully reporting back on the road’s surface, generating modern levels of grip – thank the 100mm wider track for that – but without the flat-footed feel of so many over-tyred contemporary performance cars. It’s one of those drives that has you checking the classifieds at the next fuel station, let alone when you get home.

From Newtown you have many options, either to continue deeper into Wales and eventually Snowdonia, or as in our case, head for home. Again, there are choices, but I’d head south and look for the B4355 out of Dolfor, which takes you up and over the hills, around some vicious hairpins and on to Knighton, before heading back in the direction of Ludlow. The historic country town is a decent place to refuel car and driver, before the staid but thankfully short drive back home to Birmingham, head full of great memories.