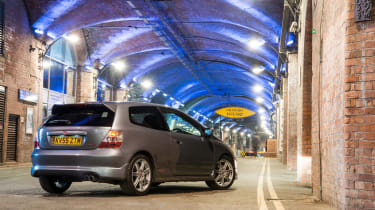 Question: Does the Honda Civic Type R sound better echoing off the walls of a tunnel deep in a city centre ring-road, or reverberating through the hedges on a twisting country road?

Trick question, of course. It’s addictive and hysterical in both scenarios, and many more besides. Maybe, when we’ve all become tired of the rampant but curiously bland performance of some of the modern crop of hot hatches, a manufacturer or two might one day brush the dust off the tall red cam cover of a K20A four-cylinder, mutter approving noises, and slowly but deliberately push technical drawings of turbochargers to one side. 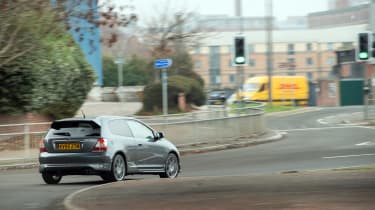 If it never happens, at least engineers did the job properly once upon a time. It takes just seconds to feel at home in the glassy surroundings of the EP3-generation Civic and mere yards to fall for its drivetrain out on the road.

Finding our way out of Leeds on a wet Tuesday morning perhaps isn’t the most inspiring parallel to Kanjozoku street racers howling through Osaka, but then this generation of Type R was built in Swindon rather than Suzuka, so maybe it’s more appropriate than we think. And I’m still getting to enjoy the smooth, almost digital rise of revs as the four-cylinder works effortlessly towards a red line just shy of 8000rpm (and a fuel cut-off at 8600rpm). The VTEC cam profile change takes place at 5800rpm on these engines, and no current turbocharged lump compels you to hang on for as long, even if they get anywhere near this Civic’s engine speeds. 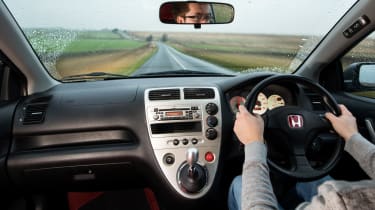 The high red line does make you feel like a bit of an oik in town though, which is why we’re heading into the Yorkshire Dales to find some proper roads. Actually, we’re cheating a little. It can take a while to get out of Leeds, and our aim for these UK drives to find a great road within half an hour or so of a major town or city rules out the deepest depths of the Dales, so I’ve settled on a few well-trodden routes on the outskirts of this National Park, just north of neighbouring Otley.

Not that this is in any way a step down. While these runs through the countryside aren’t quite as unbroken as those further from civilisation, the southernmost fringes of the Dales skirt farms, woodland and reservoirs, and throw up just the kind of quick adrenaline hit you might be after if you fancy an afternoon away from the concrete towers and tunnels.

From Leeds we head up the A61 to Harewood – worth a stop on its own for the stately home and the famous hill climb – before cutting across the A659 to Pool in Wharfedale. Sticking briefly on the main road you then peel off towards Leathley on the B6161. 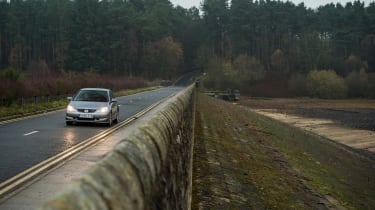 Here you have two choices: ride the rollercoaster towards Beckwithshaw, or head through Farnley, skimming the hedges on a road that takes you past a trio of reservoirs.

We do the latter, because there’s a twisty section on the B6451 that should suit the Civic quite nicely, and provides long opportunities to stretch the 197bhp engine to its fullest. The rain is keeping cornering speeds relatively sensible, but there’s no stopping that engine. While the Swift Sport that’s along as support is having no trouble keeping up, even its impressive engine and gearbox fade in comparison to the tactility of the rev-thirsty EP3 and its ultra-slick, high-mounted, aluminium-topped gearshift.

The Civic’s front end hangs on better than expected on the long and bumpy uphill left-hander passing north through Stainburn Forest, and the high red line means hanging on to second – to make the most of the top-end power – is positively encouraged. The following swoops through the trees are better appreciated with the confidence of a dry road though, before you burst into more open scenery towards Bland Hill. 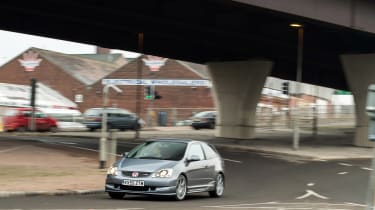 As I discovered when I used to live in the area, the choices here are endless. Continue north and you pass The Sun Inn as a possible lunch stop, before a tricky complex of curves that skirt farm buildings. Follow it to the end and you reach the A59 Skipton Road, beyond which is Pateley Bridge and the Nidderdale area, an hors d’oeuvre to the full Dales experience.

Or you could turn east at Bland Hill, tackling the relatively straight but challengingly bumpy road towards Little Almscliffe, emerging just before Beckwithshaw and giving you the option to meander south again on the B6161 we skipped earlier on, or head into leafy Harrogate for coffee.

Turn left towards Swinsty Reservoir and while you’ll have to temper your pace along the narrow roads towards Fewston, you’ll pop out the other end on the Askwith Moor Road, which offers stark moorland views and a handful of tricky twists that any hot hatch should relish. From there, too, you can aim for the Yorkshire Dales proper, should you have more than just a few hours at your disposal. 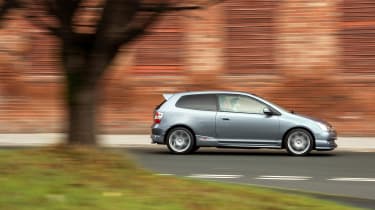 The Honda feels like an ideal partner for any of these roads, the hills and tight corners giving you ample chance to experience its drivetrain both up and down the ’box. The muted steering feel isn’t such an issue today either, as at less than maximum attack there’s enough precision, and the chassis feels balanced enough to enjoy at more modest speeds.

Ideally you need more time than an afternoon to appreciate what the Yorkshire Dales has to offer, but the great thing about the EP3 Civic Type R is you can enjoy it even in Leeds, from that very first twist of the key.