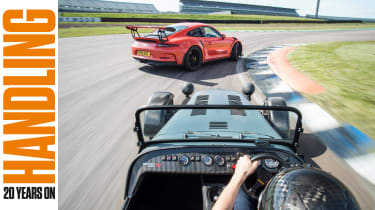 What’s the most important feature for a driver’s car?

Driving emotions. That means a direct and immediate response to all the actions taken by the driver, which has to be perceived by all the driver’s senses: not just eyes and ears, but also the stomach.

What car maker do you respect, and why?

I respect all manufacturers that translate brand values into coherent product characteristics. I’m impressed by makers that have a vision which looks beyond existing limits and that play a pioneering role in sports cars, but also in other areas like electric car production, or autonomous driving.

What do you think will be the next big thing in chassis development?

I can’t talk about that, because we are working on it now! 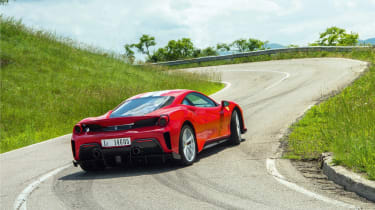 Has EPAS made good handling easier to achieve?

I can only really comment for Ferrari, and the answer is a decisive yes. With EPAS we were able to give the driver better driving feeling and feedback, providing support especially when on the limit. Thanks to the integration of EPAS into our electronic vehicle dynamics controls on the 812 Superfast, we were able to introduce what we call the Ferrari Peak Performance Advisor, which helps the driver understand when the car is approaching its limit and gives steering wheel torque feedback to help control oversteer.

Very useful. Ferrari pioneered the integration of different electronic vehicle dynamics controls into a single, steering-wheel-mounted command with the manettino on the F430. Being able to control the various vehicle performance parameters in each individual setting enables each driver to benefit from the maximum control of the car depending on conditions and their own ability, and this is one of the major factors in enhancing the driving emotions I was talking about earlier.

Is the Nürburgring useful to car set-up?

The Nordschleife is an important engineering reference – its length and complexity give us very robust feedback on the general handling parameters of a car. But for Ferrari, it is just a part of our development process – we’re not looking to set a record for just one lap. Ferrari’s philosophy is instead to build a car that any client can drive out of the showroom, take to the Nordschleife and lap in times close to that of our test drivers – times unimaginable just a few years ago. The real secret behind Ferrari’s DNA is the Fiorano track and the roads around Maranello. That’s how we find our unique combination of performance, grip, handling and ride comfort.

How do you make an all-electric car engaging for enthusiast drivers?

I’d rather you passed this question on to other car manufacturers!