They might not make much sense, but we rather like a hardcore hatchback. We explore two of the best 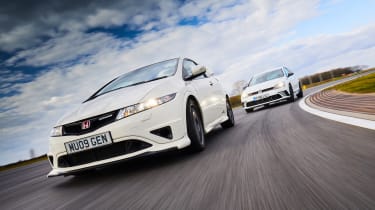 The hardcore hot hatch really defies all rational thinking. The best pocket rockets deliver on practicality as much as they do performance and poise, so making one that’s as difficult to live with as a stripped-out supercar makes no sense on any number of levels. However, when you’re in the pursuit of driving thrills you tend to leave cool, hard logic at the door.

First of the mad hatches was the 2006 Mini Cooper S Works GP, which ditched the rear seats and air con as part of a 50kg diet, and featured a tweaked, 215bhp version of the familiar supercharged 1.6-litre four-cylinder, plus a limited-slip diff. All 459 UK cars found homes, and today prices start at £14k.

A couple of years later came the Renault Sport Mégane R26.R. A carbonfibre bonnet, polycarbonate windows, Sabelt racing seats and harnesses and the ditching of soundproofing helped hack an astonishing 125kg from the regular hot Mégane and, in combination with sticky Toyo 888 rubber, saw it deliver a record-breaking 8min 17sec tour of the Nürburgring. Its focus on speed set a trend, with more and more manufacturers turning out specialised hatches tasked with lowering lap times, culminating in 2016’s Volkswagen Golf GTI Clubsport S. 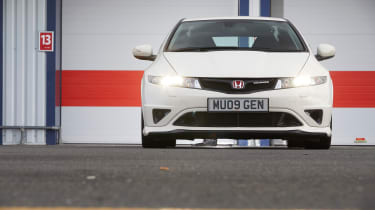 It may be based on a Golf GTI, but poke your head inside and there’s all the confirmation you’ll need that this car belongs in the category marked ‘special’: a giant strut brace where the rear bench should be and a pair of chunky, figure-hugging seats up front. Oh, and a manual gearbox – the DSG was deemed too chunky. The VW’s lap-slaying pace (7min 49sec) comes from its 306bhp 2-litre four-cylinder, carefully tuned aerodynamics, reworked suspension and bespoke Michelins Cup 2s.

In many ways it doesn’t feel all that hardcore, with the sophisticated damping and light controls making it as easy to drive as any Golf. It’s when you up the pace that the Clubsport comes alive, scything through corners with tenacious grip and unflappable poise. It’s a fantastic device, and it’s not hard to see why all 150 UK cars sold out almost instantly, or why those that are for sale today command £40k.

That’s about what a Honda Civic Type R Mugen cost when it landed in 2009. Developed and built by Mugen’s European HQ in Northampton, just 20 of these FN2 super Civics were made. The naturally aspirated 2-litre VTEC unit featured more aggressive cams, new pistons, a revised inlet system and a remapped ECU, all of which helped raise power from the standard Type R’s 198bhp at 7800rpm to 237bhp at a frenzied 8300rpm. It also took seven days to build, compared with a single day for a regular Type R. Elsewhere there was lowered and stiffened suspension, larger brakes, a limited-slip diff and special Yokohamas so attached to the tarmac you wondered whether they were suffering from separation anxiety. 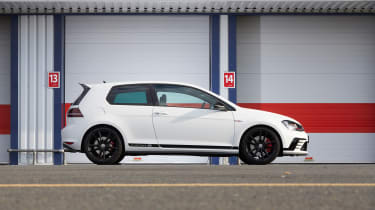 On the move the washboard ride is clearly suited to the track rather than a B-road. It’s the engine that shines brightest and dominates the dynamic disposition of the car. But you really, really have to work it hard to get results, the Honda only fully waking up as the needle swings past 5500rpm. From there to the 8600rpm cut-out it’s a different beast, revving with real urgency and emitting an ear-tingling metallic howl. It’s made even more exciting by the seductively slick gearshift that eggs you on into swapping cogs just for the hell of it. It’s not the most polished performer, but the Honda is most definitely hardcore, and in all the right ways.

As for the future of the hardcore hot hatch, SEAT’s new Cupra R doesn’t really go far enough, and price in this sector is a considerable factor that manufacturers lose sleep over. Not that this stops us from dreaming of the next Mugen Type R or Mégane Trophy RS…