The roster of hardcore driver’s cars has members from all corners of the globe. We look at some of the best 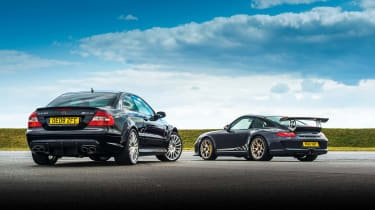 BMW’s M3, Porsche’s 911 and Mercedes-AMG’s C63 are all achingly desirable machines, cars that have the ability to perform as proficient, exciting road and track cars. But as well as appealing to you and me, they also need to work over a broader spectrum, to satisfy a wider audience, and this means that their ultimate potential to thrill isn’t being realised. Narrow such a car’s operating window, however, make it stiffer and noisier and its controls heavier, and it can deliver so much more for people like us.

What Porsche, AMG, BMW et al do to make their most hardcore sports coupes feel more at home around the Nordschleife than the North Circular will be familiar to scholars of the Demon Tweeks motorsport catalogue. Big brakes, stickier tyres, roll-cages, bucket seats, harnesses, Plexiglas windows, uprated springs and dampers, thicker anti-roll bars, solid-mounted or rose-jointed suspension, carbonfibre wings, lighter and louder exhausts – these cars already have everything you might otherwise earmark in that sacred catalogue. But the factory-prepped cars also get changes that only their manufacturer could or would make: stiffer and sometimes wider body shells, bigger capacity or unique engines, bespoke gearboxes.

It can be easy to forget just how thorough and comprehensive the work that goes into such cars is. The leap from 4-series to M4 GTS is colossal; put a C-class next to a C63 Black Series and it’s like they’re barely related at all. Tot it all up and the price premium – sometimes as much as 100 per cent – that such hardcore cars might command over the merely sporty originals starts to seem reasonable. 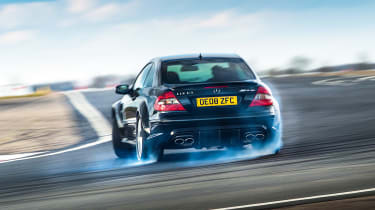 But these cars are defined as much by what you don’t get as what you do. Back seats, sound deadening, door pockets and proper interior door-release handles are rarely seen, and air con and satnav can often be deleted, too. The absence of such non-essential equipment, combined with a higher price, only serves to divide those who ‘get’ these cars and those who’ll never understand. Other than the price, the only major downside for connoisseurs of the hardcore coupe is that they are often limited to tiny numbers or sold only to ‘special’ customers.

The trend for hardcore coupes really gathered momentum just after the turn of the millennium. Between 2000 and 2004 Lotus released the S1 Exige, Porsche the 996 GT3 RS, TVR the Sagaris and BMW the E46 M3 CSL. Since then, Aston Martin has created the GT12 and GT8 versions of its Vantage, Nismo has given the GT-R a thorough going over, BMW took things really seriously with its M3 GTS and M4 GTS  and even the Americans have had a go with the Chevrolet Camaro Z/28.

One of the most unlikely contributors to the niche, however, is Mercedes-Benz. AMG goes some way to eradicate the waftability from many of Mercedes’ coupes and saloons, but it wasn’t until the Black Series arrived that its road cars could really be considered hardcore.

The CLK63 AMG Black Series of 2007 was the second model to bear the dark title (an SLK55 with a fixed carbonfibre roof was the first). The naturally aspirated 6.2-litre AMG V8 was given a less restrictive inlet and exhaust system, a new ECU, bigger radiators and an additional oil cooler to increase its output to 500bhp (up 26bhp). A further two oil coolers were added – one for the seven-speed auto gearbox and another for the multi-plate limited-slip differential. The body was strengthened, strut braces were added and the chassis had bespoke suspension components, too. Even the wheels were vastly different in size and width from a regular CLK’s, although their chrome finish is a reminder to the car’s less-than-hardcore origins. 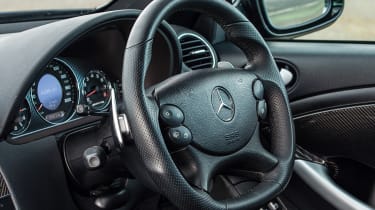 But then there’s the massive DTM-style wheelarches, the carbonfibre vents, spoiler, diffuser and door cards, the absence of rear seats, and basic cloth-covered fixed-back buckets up front all reminding you that this is no ordinary AMG.

Behind the wheel, the Recaros provide a seating position that makes you feel like you’re being tipped forward, and this focuses your attention on the squat, wide front axle. But you’re glad it does. The CLK Black’s nose is so planted it feels as though the whole car has grown from the front tyres backwards. The pointy snout is more like that of a featherweight front-drive hot hatch than a 500bhp rear-drive coupe, only there’s none of the pulling and tugging as the driveshafts fight the steering wheel, just a crisp, clean action from lock to lock.

Such aggressive agility and grip has its consequences, though. At speed, each time you move the steering wheel the rear tyres feel as though they’re teetering on the edge of grip. It then only takes the lightest additional touch of the throttle and the gargling V8 can light up the back tyres and you smoke your way through a corner. Do so and you can simply choose your angle: a light throttle keeps it neater, the back tyres just slightly over-rotating, but big jabs of the accelerator induce some spectacular angles – and just when you think you’ve gone too far, there’s just an extra bit more lock than you thought to help catch your slide.

So to get the best out of the Black you need to keep your inputs smooth and be progressive with the throttle, feeding in the prodigious torque as the grip allows. Even with that incredible V8 it’s the CLK’s edgy chassis that’s most memorable. Guiding it through corners is just the most exquisite experience. Until you’ve got used to the Porsche, that is.

Credit has to go to Porsche for flying the flag of the hardcore coupe for such an impressively long time. The company helped define what this sort of car is and for over 50 years has created road cars that offer raw experiences. Many of them were born from competition; homologation-special road cars fitted with lighter panels, bigger engines and extra wings to allow evermore trick components to become legal on its race cars. The 911 2.7 RS is one of the most memorable, but the STs that preceded it, and even the 356 Carrera with its four-cam race engine, also fit the hardcore mould.

One blast down a straight, with the ‘Mezger’ flat-six turning a snarling mechanical growl to a shriek as the needle swings around the rev counter, and you can see why it’s one of our all-time favourites. The drama unfolding behind you then pauses for the briefest moment as you shift gears at a speed that a PDK ’box would be ashamed of. The stiff clutch and close gate is far harder to finesse than a simple paddle, but it’s infinitely more enjoyable. 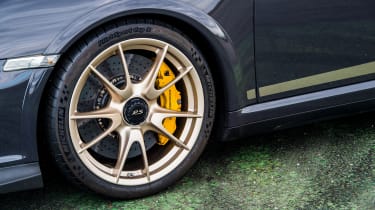 However, you begin to doubt the RS’s brilliance when you enter the first corner. Being tentative and cautious, as you would be in your inaugural go in a road-legal race car, you’re served up heaps of understeer. It feels like a painstaking amount of time before you can get on the throttle fully, each squeeze of the accelerator with any lock on making the nose push wider.

But put your brave face on and properly commit to a corner – brake hard and late, pinning the nose to the line, turn in decisively, use the throttle like you know the rear-engined layout will give you the traction you need – and the GT3 RS makes sense. String a corner together just right, the nose tucking into an apex as you roll off the brakes, settling the car with the throttle, the nose lifting as you power out of the corner, and you won’t want it to end.

Ultimately, it’s the way this kind of car is set up that’s most impressive. The no-nonsense, take-no-prisoners, absolutely won’t-suffer-fools balance and aggression they exhibit is tricky to master, but also phenomenally exciting when you do.