They might have been designed with very different purposes in mind, but how do the two Ariels compare on track? 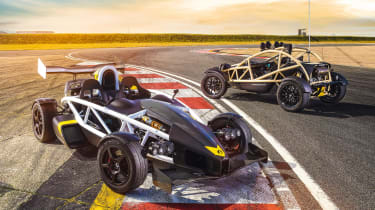 Ariel makes you question how much car you really need. Back seats? Those are just extra weight, more so if you’re foolish enough to carry more than one other person around with you. Heating? Not necessary. You dress for a drive in an Ariel much as you might for any other outdoor activity, turning a very long and suspicious eye to the weather before donning as few layers as you think you can get away with for the prevailing conditions. In-car entertainment? You wouldn’t be able to hear it over the wind roar and the howl of the Honda engine behind you, and you’ll probably be wearing a helmet anyway.

And bodywork? What do you think this is, a Caterham? Even the Nomad – with such luxuries as a thin sheet of Perspex to ensure at least some of your face won’t be slathered in mud – allows you to see the front tyres through the exoskeleton and only keeps rain off you if you’re in motion.

> Click here for our review of the Caterham Seven

Ariel, then, offers minimum-car, maximum hardcore. You’ll find little – possibly nothing – on them that isn’t directly related to either the driving experience or for the boring but necessary subject of legality. So you do get headlights and tail lights, a wiper for the Nomad’s optional windscreen, vestigial cycle fenders over each wheel and a set of number plates. 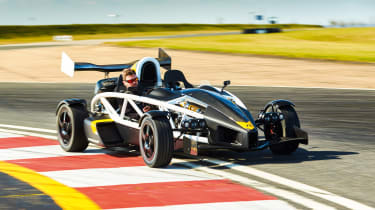 In cars with dry weights of 520kg and 670kg respectively, those outputs are, well, more than enough. The standard 245bhp Atom has a better dry power-to-weight ratio than a Lamborghini Aventador S (479bhp per ton plays 471).

> Click here for our review of the BAC Mono

Then there’s the huge list of options to turn your just-about-a-road-car into definitely-a-race-car, from sequential Sadev gearboxes to data loggers, slick tyres and carbonfibre front and rear wings – or rally-spec gravel tyres, a winch and a snorkel if you’re planning more serious off-roading in the Nomad.

Hardcore? Almost too much for the road in the case of the Atom. As a clue to its focus, an Atom has only appeared in evo Car of the Year once, back in 2004, and the weather, wind and grit of north Wales made the experience quite unpleasant for some and meant the Atom narrowly avoided last place – several spots below a Mercedes SLK, of all things. ‘Just glad to get back to the hotel in one piece,’ was how Peter Tomalin put it. Eek. 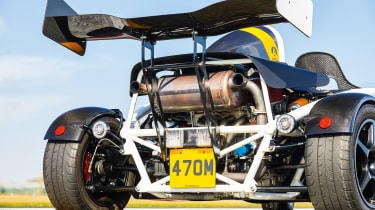 Yet Atoms have appeared in our Track Car of the Year tests several times, for the reasons you might expect: they’re blisteringly fast, astonishingly grippy and addictively responsive, while bugbears such as a firm ride and a lack of weather protection fade into insignificance when you’re reeling in supercars like they’re superminis.

The Nomad’s trick is combining the Atom’s thrills with more usability. Not in the traditional sense – you probably wouldn’t go shopping in it, though we’d positively encourage the odd sortie for a pint of milk or loaf of bread, particularly if there are a few green lanes between your home and the corner shop – but nor do you need a socket set to adjust the driving position, a full-face helmet to preserve your vision, or an aversion to anything approaching a bump. The Nomad’s long-travel suspension absorbs everything a road can throw at it without ever feeling floaty, and the car also squats, dives and rolls enough to let you know what’s going on underneath you.

> Click here for more on the upcoming Arial Atom 4

As we discovered upon the Nomad’s launch, this extra travel makes even more sense away from tarmac, on the sort of surfaces that even an Impreza might think twice about. Just as the Atom has kept pukka race machines honest in our on-track tests, so the Nomad didn’t lose its shine (metaphorically, at least) when up against WRC Fiestas and Tuthill 911s in Henry Catchpole’s gravel group test in evo 218. Kicking stones in the face of race cars? That’s pretty hardcore. 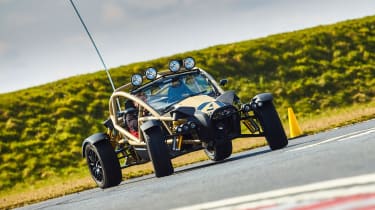