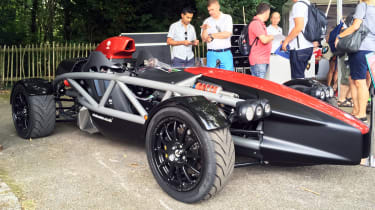 The new Ariel Atom 4, the latest instalment in the British marque’s track car series, has been revealed. Despite the familiar aesthetic, the new model is ‘an entirely new car from the ground-up’. Four years in the making, it represents the ‘biggest change on the Atom since 1999’, according to Ariel Motor Company general manager Tom Siebert. Priced at £39,975, deliveries will start in Spring 2019.

Honda supplies the engine, which comes from the Civic Type R, marking a switch from supercharged to turbocharged power for the Atom. Siebert explained the move was forced to satisfy emissions standards. ‘With the previous car, the Honda engine was only Euro 4 so we couldn't have gone for type approval even if we'd have wanted to.’

In this application the 2-litre four-cylinder engine develops 320bhp and 295lb ft of torque, representing increases of 10bhp and 126lb ft respectively over the Atom 3.5; bespoke engine mapping, a stainless steel exhaust and the 4’s unique intake deliver the 4bhp advantage over the Type R.

To best deploy the performance, Ariel has calibrated the Atom’s ECU to accommodate both traction control and launch control (which are optional extras), and has also installed a (turbo) boost controller.

The tubes forming the all-new chassis are larger in diameter, and have been designed to create the lightest, yet strongest structure possible. As a result torsional rigidity is up 15 per cent compared to the 3.5.

A revised version of the 3.5’s inboard, pushrod-operated damper system has been carried forward. There’s a new geometry configuration that features ‘anti-squat and anti-dive to reduce unnecessary body roll and weight transfer’, according to Atom, so the tyres should maintain better contact with the road under acceleration and braking. Bilstein dampers constitute the standard, passive set-up. However, a semi-active Öhlins package is currently under development.

Ariel has worked on the steering rack to ensure drivers across a broad skill range can comfortably pilot the Atom 4, which was a key deliverable in the design brief according to Siebart: ‘We wanted to create a car that was friendlier for the novice driver, but still engaging for an expert one.’ 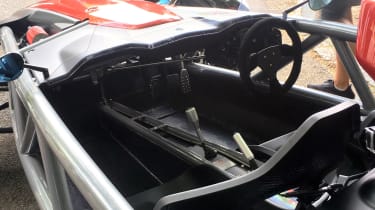 Applying new bodywork, Ariel has managed to reduce drag, increase downforce and better manipulate the airflow streams which feed the radiator, intercooler and engine. The roll hoop – a design hallmark on previous Atoms – is no longer visible, situated within the bodywork encasing the engine air intake.

Further aero-honing extended to the aero screen. The new design better directs air over the cockpit, within which the twin-seat unit has been ditched in favour of individual seats.

Ariel expects to build around 100 Atom 4s a year, each built to the customer’s unique specification.