We put two track-oriented, mid-engined V8 supercars head to head to find out which is best 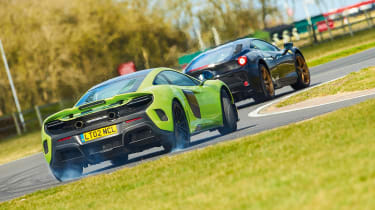 Of the cars in our gathering that have evolved from existing models, it’s the mid-engined machines that were ripest for the hardcore treatment. Perfectly balanced thanks to their motorsport-inspired distribution of masses, they have the capacity to thrill like no other. Yes, they can also snap with the ferocity of a great white, but this fine line between risk and reward is all part of their sweaty-palmed, heart-racing appeal.

The 360 Challenge Stradale of 2003 galloped pretty much straight off the circuit and onto the road. Light, powerful and with a laser-guided focus on driver engagement, it was raw and richly involving in equal measure. The 430 Scuderia upped the stakes and performance four years later, but in 2014 the Prancing Horse took an even bigger leap with the 458 Speciale.

Thanks to its use of carbonfibre, thinner glass, forged alloy wheels and ceramic brakes, the Speciale trimmed 90kg from the standard 458 Italia, but it was what was hiding under the engine cover that was really exciting. Among a raft of changes, the 4.5-litre V8 featured lightened components and a higher compression ratio, resulting in 597bhp (up from 562bhp) at a howling, nape-prickling 9000rpm – few engines deliver such brutal acceleration or such a symphonic soundtrack. 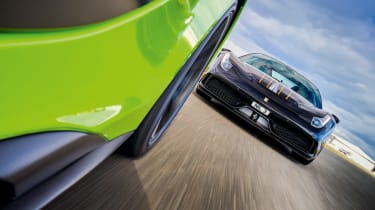 The suspension was given a similarly no-holds-barred overhaul, plus there were Michelin Pilot Cup 2s and the first iteration of Ferrari’s Side Slip Control. The handling was, and is, sublime, with quick steering and a chassis that offers non-stop communication. No pressure then, 488 Pista.

Although a relative newcomer to the supercar class, McLaren had an answer to the Speciale in the form of the 675LT. The legendary F1 and P1 are proper, blue blood hypercars, but it’s arguably the 675 that’s the most dedicated driver’s car yet to turn a wheel out of Woking. Based on the 650S, the LT featured bespoke carbonfibre rear bodywork and radically enhanced aero additions that increased downforce by 40 per cent, plus helped towards the impressive 100kg weight loss over the 650. It was 20mm lower and 20mm wider, while the twin-turbo V8 featured many new components, helping to push power up from 641bhp to a demonic 666bhp. The performance figures make fairly startling reading, with the 0-62mph sprint over in 2.9sec and a top speed of 205mph – no wonder some McLaren insiders reckon it’s faster than the P1.

Perhaps the most exciting aspect of the LT is its capacity to entertain. Until it arrived, McLarens had gained a reputation for being shatteringly quick but a little aloof – you almost drove by numbers, relying on the car’s technology rather than its balance and your feel. Yet from the spartan carbon cabin of the 675 you were treated to a car of true personality, one that could generate incredible cornering forces and lap times that would test the bravest, but one that also dripped with feedback and an intensity that left you buzzing after every journey.

Entry to this hardcore high-end market isn’t cheap – you’ll need at least £300k to buy either of these models. But they represent the best of their breeds in terms of thrills and enjoyment. The McLaren is wickedly fast and oh-so-capable, the Ferrari one of the very best.