From purple pens to race results in carefully-filed folders, here's our look behind the scenes at Enzo's Fiorano office 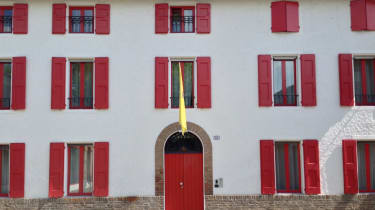 I’m not entirely sure the purple pens sitting in a small leather tub on Enzo’s desk are original, but the sentiment is there. You’ll know by now of course that Il Commendatore used to sign his letters with a fountain pen, in violet ink, and Ferrari has kept Enzo’s house at Fiorano much as he left it on his death in August 1988. That includes the pens, or at least facsimiles of them.

Old photos of Enzo tend to depict him in his office, but his house at the Fiorano circuit – where Michael Schumacher later stayed during his testing days – is equally fascinating. 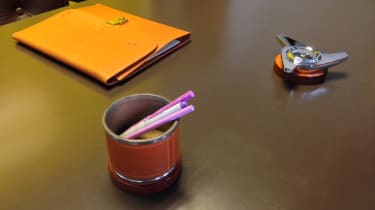 Behind the desk with its purple pens is a tiled wall. Bright yellow. Subtle it is not, but the faded Cavallino on each tile is nothing if not unique. Alongside the desk you’ll find a cabinet, atop which sits a telephone and a small television. To the left is another cabinet, decorated with a crankshaft and exhaust manifold.

Most interesting of all is the bookcase featuring tweed-bound folders, each containing a full list of racing results from every racing season in which Scuderia Ferrari has competed as a constructor – initially in the 12-cylinder, 1.5-litre Tipo 125. The faded script on the very first folder reads ’47 48 49’. 2004’s folder – a year in which Schumacher took 13 victories from 18 rounds – is notably thicker than the others.

The house itself is striking. Numbered 27 – the favoured number of Gilles Villeneuve and since adopted by several other Ferrari drivers – it sits at the head of Piazza Michael Schumacher. The house runs three storeys high and sports a large yellow flag above its front door. The door – and every shutter and window frame – are painted bright red. 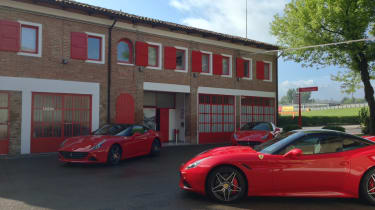 Across the courtyard are the company’s original racing garages, now converted to offices but retaining the rustic façade, and an old barn, complete with an enormous Scuderia shield and also converted for modern use. You’ll probably be familiar with Piazza Michael Schumacher – it’s been the backdrop in dozens of TV and magazine car handovers, ahead of inevitable tyre-squealing fun on the Fiorano circuit itself. It’s an oasis of calm.

Amazingly, Enzo’s house can be rented for meetings, conferences and the like – there are of course many more rooms than the preserved office, though most still creak under the weight of Ferrari memorabilia.

There’s no word on whether purple ink is provided but with F1 testing now banned, the neighbours aren't as noisy as they used to be.