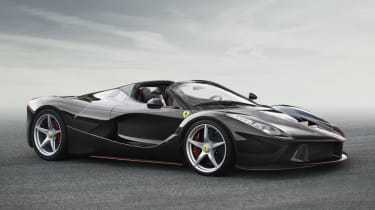 Though no name has been confirmed as yet, these images depict the open-top Ferrari LaFerrari set to make its debut at the Paris motor show later this year.

Available in limited numbers, the new open-topped variant will use the same drivetrain as the regular LaFerrari. That means twelve cylinders in a vee, 6.3 litres, 789bhp at 9000rpm and 128bhp per litre.

It also means the same hybrid setup that lifts those figures with a 161bhp, 199lb ft electric motor. In the fixed-roof car, that results in a 0-62mph time of three seconds flat, and a top speed of over 217mph.

The "Spider" version of LaFerrari will come with both hard and soft tops, the former formed from carbonfibre. Ferrari has already confirmed that its performance figures will be identical to those of the coupe, albeit a little breezier. 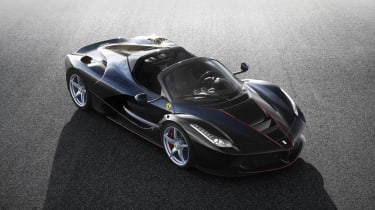 Any decrease in structural rigidity has been mitigated by 'extensive modifications' to the chassis, apparently maintaining the same torsional stiffness as before. The identical performance figures have been achieved through aerodynamic tweaks, ensuring the car's drag coefficient is unchanged even with the roof panel removed.

The price? Irrelevant, since Ferrari has already sold every unit after a 'special preview' to Ferrari's select bunch of loyal, hand-picked clients.

Nevertheless, we'll be able to see the car at the Paris motor show, which opens its doors on October 1, 2016. Further details of the car are likely to be revealed in the run-up to the show.

Want to know why the open-topped LaFerrari will be special? You can catch our review of the coupe below.