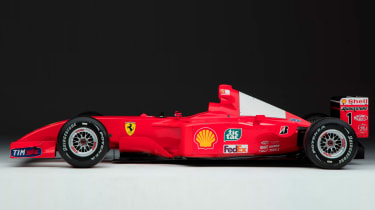 The Ferrari F2001 driven to the Formula One driver’s championship by Michael Schumacher in 2001 will be crossing the auction block later this year. The consignment will be tendered by RM Sotheby’s during the Contemporary Art Evening in New York this November.

RM Sotheby's says the sale marks the first time a collector car will feature in one of its art auctions, and that this cements automotive design as a recognised artistic form. The Maranello masterpiece is expected to generate bids in excess of £3million.

The F2001 chassis took Schumacher to the second of five consecutive titles he clinched for the team during Ferrari’s most dominant period in the sport. Over the seventeen race weekends in which Ferrari deployed the F2001 at the hands of Schumacher, it claimed eleven pole positions, bagged nine race victories and a further five second-place finishes.

> Click here for our review of the Ferrari 488 GTB

Scuderia Ferrari accumulated 179 points, romping its way to the construtor's title, with Schumacher accruing the lion’s share of points, 123, with Rubens Barrichello topping up the total. While this was a dominant showing, the revised F2002 that was used by Schumacher the following season collected two more victories with the seven-time world champion at the helm.

The F2001 was the brainchild of Ross Brawn, then Technical Director at Scuderia Ferrari. The 3.0-litre V10, cradled within a carbon fibre tub, serenaded the adoring Tifosi on the straights of Monza with a sky-high red line of 17,300rpm; power peaked at 825bhp in qualifying trim.

The Tipo 050 engine was lighter but just as powerful as the V10 that preceded it, tipping the scales at just 100kg. This brought the whole car’s weight below the 600kg minimum weight regulation. To reconcile this, engineers placed ballast within certain points of the chassis depending on the track it was racing at to bring the weight back up without compromising performance.

To keep this highly-strung machine in tip-top condition Ferrari will offer to store the car and transport it to prearranged locations where a band of Ferrari mechanics, technicians and test drivers will be on hand to ensure the new owner makes the most of the experience should they choose to drive the piece of ‘usable art’ as it’s referred to by RM.