A Ferrari 250 GTO is heading to auction during Monterey car week with a huge estimate. 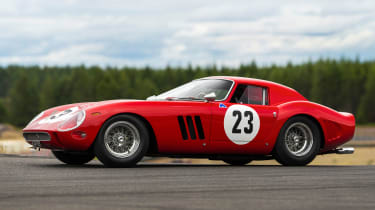 RM Sotheby’s Monterey Sale will feature a 1962 Ferrari 250 GTO valued at $45m (c£34m). It goes under the hammer during the Pebble Beach Concours d'Elegance as the most expensive car in auction history, according to RM.

The GTO’s lofty value comes courtesy of the model’s exclusive status (only 36 made production) and its billing as the prettiest Ferrari in history. Furthermore, with 300 race victories to the GTO’s name it’s ingrained in Ferrari folklore, serving to prop-up the sky-high estimate you see quoted here.

Keen collectors will be happy to see chassis no. 3413 GT retains its original engine, transmission and gearbox. However, two years after leaving the factory it was reclad with the Scaglietti-penned, series 2 body.

Ferrari employed this example as a test car and entered it into the 1962 Targa Florio with Phil Hill at the helm, before delivering it to its first owner, with whom the famous race car collected nine wins from ten races in the 1962 Italian National GT championship.

In the following two years, under as many owners, the GT clinched class victories at the Targa Florio, as well. This specific GTO’s impressive record went some way to earning the model its indomitable motorsport reputation.

Following the contemporary Ferrari engine blueprint, the GTO had a carburettor-fed, 3-litre V12. With 296bhp on tap the GTO could reach speeds in excess of 170mph.

Speaking about the coveted classic, RM Sotheby’s car specialist Shelby Myers said: ‘Due to the evolution of technology and safety regulations that followed, the GTO was essentially the final true road racer, marking the end of an era when drivers really got their hands dirty. This was the last car that you could park in your garage, drive to the track, win the race, and then drive home.’