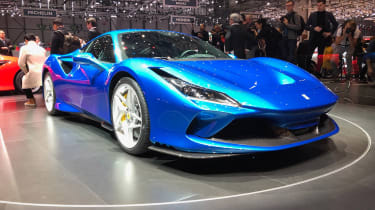 Ferrari revealed the F8 Tributo at this year’s Geneva motor show in a surprise move to replace the current 488 GTB sooner than expected. But rather than an all-new model as expected for this Ferrari model cycle, the F8 is instead a very heavy update on the current chassis, with a Pista-derived engine, fresh styling, and a power figure breathing down the neck of ambitious rivals like the McLaren 720S.

The reason is the incoming hybridised supercar that Ferrari has in the wings, more of which we’ll learn about in the coming months. For now, the F8 is Ferrari’s most potent mid-engined supercar, with lots of detail refinement to a package already dripping in appeal and capability.

The F8’s heart is a flat-plane crank 3902cc twin-turbocharged V8, lifted wholesale from the 488 Pista, which means 711bhp (an increase of 50bhp over a 488 GTB) at 8000rpm, with 568lb ft of torque available from 3250rpm. That torque figure is produced in Ferrari’s clever staged system, gently building up to peak torque through the gears to give a more naturally aspirated feel to the whole powertrain and reduce turbo lag. The only powertrain component not carried over from the Pista is the exhaust system.

The transmission is also the same whip-snapping seven-speed dual-clutch, no doubt with further refinement to the software improving drivability and shift speed. As a result, the F8 will hit 62mph in 2.9sec – a figure shared with both the previous Pista and current McLaren 720S, and reach 124mph in just 7.8sec, again identical to the 720S. Top speed is 211mph, a single mph behind that pesky McLaren, while its Fiorano lap time of 1min 22.5-seconds is half a second quicker than the GTB and a second slower than the Pista. The latter down to the Michelin Cup 2 R tyres available on the Pista; you will be able to specify regular Sport Cup 2 tyres for your F8.

Ferrari quotes a ‘dry’ weight of 1330kg, 40kg lighter than a GTB, although this comes with a caveat applied that the figure is only reached when ‘lightweight options are fitted’, such as the carbonfibre wheels. This is in line with Ferrari’s recent weight quoting system, McLaren's 720S’s dry weight is 1283kg for context. The F8’s weight disadvantage compared to McLaren is down to Ferrari’s adherence to an aluminium space frame chassis architecture, rather than the carbon tub favoured by the British firm. Ferrari has no intention of introducing a carbon tub.

> Click here for our review of the Ferrari 488 GTB

The design is immediately recognisable as modern Ferrari, and like all recent series-production cars from Maranello it was designed in-house at Ferrari Centro Stile. Although familiar, it does feature appreciable gains over the previous 488 GTB in terms of its aerodynamic efficiency by up to 10 per cent, says Ferrari. The 488 Pista’s front-mounted S-duct, for instance, features on the F8, increasing downforce on the front axle and smoothing airflow over the cabin. However, unlike on the Pista the F8’s front bonnet is manufactured from aluminium and not carbonfibre as is the case for the Pista. 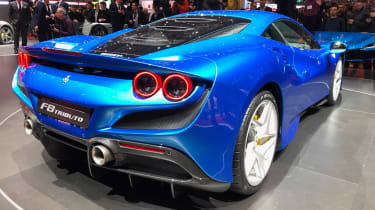 The outer ducts still feed cold air into a pair of radiators, while above the new LED headlights are brake cooling ducts, cooling the standard carbon-ceramic rotors. The new horizontal LED headlights make a change from previous V8 models, which have utilised upright lighting units since the 458 Italia. Beneath the front splitter are three smaller turning vanes that draw air away from the front wheels.

As fitting with the Tributo bit of its name (named to honour the V8 engine's three consecutive Best Engine victories in the International Engine of the Year awards), the rear introduces some gentle references to Ferrari’s past, including a return to double-roundel tail lights (308 GTB) and a new Lexan rear screen incorporating slip vents – a feature harking back to the F40. What the F8 still lacks is large-scale rear active aero such as you’d find on a 720S. The high-mounted twin-exhaust outlets sit in the same position as they did on prior 488 models, and beneath the rear wing are three active aero vanes designed to keep the aggressive rear diffuser free of aero-disturbing exhaust gases.

All good stuff, but if you feel that Ferrari’s ambition with the new F8 Tributo is a little underwhelming, that’ll likely change with its incoming hybrid-assisted mid-engine supercar, which according to insiders, will be revealed in the coming months. Ferrari will be taking a leap with the first real series-production supercar in the class (Honda NSX aside) – the F8 is likely just the insurance policy.