Ferrari 360 Modena, Spider and Challenge Stradale - the first of a new generation of Ferrari V8s 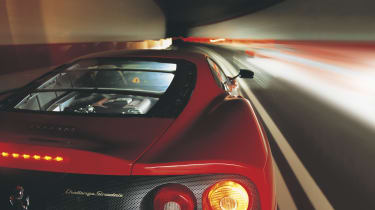 The Ferrari 360 Modena arrived in 1999, bringing with it new curves and computer-controlled suspension that immediately made its predecessor, the excellent 355, look outdated. Technologically the 360 heralded the beginning of a new approach to car design at Ferrari. The standard hardtop car was soon joined by the 360 Spider convertible then the ultimate, track-focused Ferrari 360, the Challenge Stradale arrived in 2003.

If you think of a mid-engined Ferrari with a V8 engine your mind might drift to the F40, or perhaps the mind-blowing 288 GTO so when it comes to lineage, the Ferrari 360 Modena is not short of illustrious connections.

The 360 was initially met with criticism though, as the taught compact lines of the F355 made way for a blobbier, more rounded aesthetic. If the design was met with mixed views, the driving experience definitely moved the game on, feeling more like its supercar successors then earlier mid-engine Ferraris.

Modern, lightweight and sophisticated, it featured the company’s first aluminium spaceframe chassis, which was 40 per cent lighter than the 355’s steel platform but also nearly 30 per cent stiffer, despite being slightly larger.

>See how the 360 compared to other iconic V8 Ferraris. 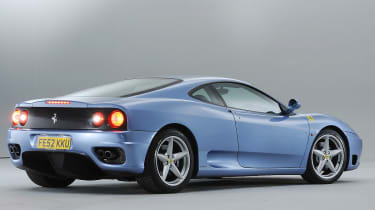 The Modena also saw a new word introduced into Ferrari reviews: reliability. The engineering had been more thoroughly thought through, and this was (and still is) reflected in lower servicing costs than for earlier mid-engined Prancing Horses.

The convertible ‘Spider’ version of the 360 appeared in 2000, then in 2003 the Challenge Stradale (not to be confused with the 360 Challenge race car) stormed on to the roads. A track-biased, stripped-out special edition, it gained titanium road springs and ceramic composite brakes, which provided legendary stopping power when hot.

Inside there were fabric-covered carbon seats, while the CD player was deleted to save weight. Perhaps most significantly, the engine was squeezed to give an extra 20bhp, knocking nearly half a second off the 0-62 time and adding 3mph to the top speed, making the CS the ultimate road-going 360.

Around 70 per cent of 360 buyers opted to have their cars equipped with the ‘F1’ automated manual gearbox, which although fine on the move and excellent on track, can make low-speed manoeuvring a little tricky until you get the hang of it.

The more track-focused Challenge Stradalé offers up a mere 20bhp more than the Modena, bringing the total up to 420bhp, but the small change on paper does not reflect the distinct change in character the CS brought to the 360.

Taking lessons from the Challenge racer, Ferrari modified the intake and exhaust systems to make the CS feel much more edgy than the Modena. On top of the engine changes, Ferrari also upgraded the software on the F1 gearbox, the only option available on the CS.

The 360 Modena could be described as feeling like a big Lotus Exige; that is to say it’s very involving, but never leaves you completely at ease. Body movements are exceptionally well controlled, but rather than digging into the road surface, the 360 can sometimes feel like its only skimming the tarmac.

This can rob you of confidence regarding how much grip the front and rear axles have left to give, and when it eventually does go, there’s a mid-engined twitchiness to the balance that you feel you don’t necessarily want to provoke. 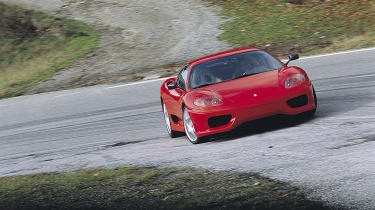 The Challenge Stradalé is a different creature entirely, feeling more like a racer for the road. Thanks to the intense weight saving regime, the CS is far more thrilling to drive than the Modena. It is edgier, harder, grips better thanks to more aggressive rubber and stops sooner on carbon ceramic brakes.

That floaty body control which defined the Modena’s driving experience is gone, with the CS giving the driver much more confidence in being able to take liberties with the available grip and push harder into corners. Despite being the more hardcore machine, it is an easier car to take to, and beyond, the limit.

Thanks to the all-new chassis, the Ferrari 360 corrected the bigger ergonomic wrongs of previous mid-engine Ferraris. Although you sit slightly higher in the 360 as compared to the F355, the newer car doesn’t possess the angled steering wheel, which makes getting comfortable tricky. It also allowed Ferrari to clean up the dash layout.

For every day use the 360 is a bit of a mixed bag. The cabin is nice and roomy, which makes getting in and out relatively easy, and visibility is generally good, unless you are reversing. However, for what is quite a big car there is remarkably little stowage room, just a small space in the nose (which can be better utilised with the matching Ferrari luggage set), a shelf behind the seats, and the glovebox, so if you’re planning a weekend away then you had better travel light and buy anything else you might need when you get there. 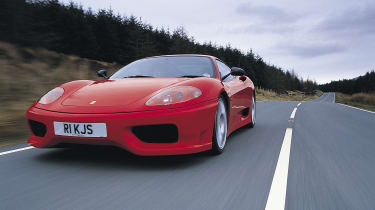 If the Modena made the mid-engined Ferrari a more liveable proposition, the CS took that quality away again, as the road racer vibe removed most luxuries from the cabin. Gone are the leather chairs, replaced instead by carbonfibre bucket seats. The stereo is gone as is the air-con, carpets and sound deadening, which mean you have to be pretty dedicated to take the CS on a long journey.

In 1999 the supercar landscape was pretty sparse. In fact there was almost nothing mid-engined at the price point occupied by the 360 Modena. Performance wise, the Porsche 911 Turbo was its biggest competition, not only outperforming the Ferrari on the road, but also offering vastly more usability.

If you were after something a little more hardcore, the 911 GT3 was also on the agenda, matching the visceral thrills of the 360, if not it’s turn of speed. The Honda NSX was still on sale at Honda dealerships, celebrating its tenth birthday, and although more useable, was outclassed by the Ferrari.

The 360 is without doubt the best thing I have ever bought. After two decades of 911 ownership I finally took the plunge and have never looked back.

My car is parked outside in the middle of a town, used every day and is a fantastic ownership proposition and driving experience as far as I am concerned. These cars were built to be used and are all the better for it. They are wonderful, but a little thirsty, mainly because it’s so difficult not to drive them! 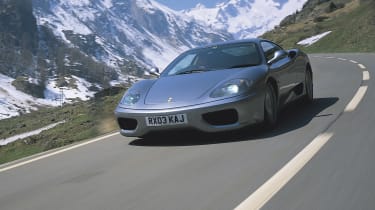 Insurance wise it costs me £450 per year and an annual service and belt change is around £600 from my independent, who I would trust over and above any franchised dealer.

These cars are fantastic value at the moment. I think most people dream of owning one but are fearful of the running costs, but I’d say go for it. Get a car that has been used, rather than a garage queen, with a full service history and you’ll never look back.

“Despite being a noticeably bigger car, the 360’s weight is on a par with the 355’s thanks to an aluminium spaceframe replacing steel box-section in the chassis. You can sense the increase in stiffness just rolling across the larger stones in the car park, with the whole car feeling tighter, stiffer and more honed. With the slightly sparse interior, and the whole bodyshell reacting to what’s underneath the Pirelli P Zeros, it’s a bit like sitting in a big Lotus Exige.” Henry Catchpole (evo 163)

“Right from the off, the Stradale inspires confidence with meaty, direct steering and a positive demeanour – it feels solid, low, connected, like it means business. It’s a great place to be, slotted into the high-sided seat, clutching the fat rim of the almost quartic steering wheel, using fingertips on the titanium-coloured paddles to cycle up and down the gearbox.” John Barker (evo 59)