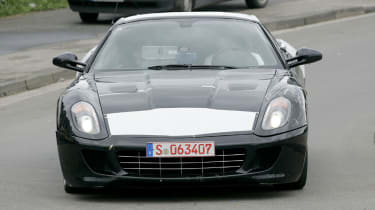 These exclusive pictures are showing a mule of the new car. Based on a 599 body it doesn’t yet give away so much but at least a little of what will become the new Dino. What identifies the test car as a mule for the Dino is the engine sound, or should we say the lack of it. It clearly doesn’t sound as sharp as a F430 for example.

The Classic Dino was built between 1968 and 1976, and its name honours the founder Enzo Ferrari´s son, Alfredino 'Dino' Ferrari, who died in 1956 at the age of 24 from a muscular dystrophy.

While that vintage Dino had a V6 behind the driver, the new one will be powered by a V8 with 400 bhp. Ferrari will most likely start with a Coupe, but expect a Spider later on. There is a high possibility that Pininfarina will do the design work with input from former Ferrari design boss Frank Stephenson, who now heads Fiat´s Centro Stile operation.

The Dino will be starting at approximately 100-110.000 Euros. Insiders are saying that it’s possible to sell up to 4000 Dinos annually once the car gets the green light for production. Such a figure would instantly double Ferrari´s yearly production and give the make a whole new group of customers. Talk is also about the new Dino to be built at the Maserati factory in the city of Modena. This city is very important to the history of Ferrari, as it is the town where its founder Enzo Ferrari was born. Even if Ferrari is still denying the project, we expect to see it on the roads in 2009.

Find a used Ferrari Dino for sale on the Classic and Performance Car site.