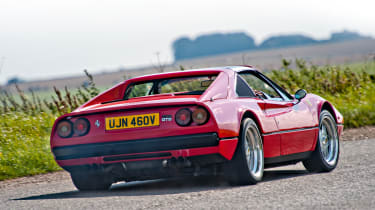 The exquisite late-‘60s Dino had introduced the idea of a ‘junior’ Ferrari. The next attempt to bring the prancing horse to the masses, the two-plus-two Bertone-styled Dino 308 GT4, had signally failed to live up to its gorgeous lines, but thankfully things were back on course when Ferrari revealed the two-seater replacement for the original Dino, the 308 GTB, in 1975.

Styled by Pininfarina – or more specifically Leonardo Fioravanti, who had also penned Daytona, Dino and Berlinetta Boxer – the 308 GTB (and its targa-top GTS sibling) was absolutely beautiful. Initially glassfibre-bodied, production switched to steel panels, which inevitably added some weight to the car, blunting the performance slightly. But it felt – and sounded – exotic enough.

To drive, it felt like a faster Dino, which was a good thing, and the 32-valve Quattrovalvole cars that followed felt fitter still. With no power steering and, on the early cars, a heavy clutch, the 308 was quite physical to drive, especially at low speeds, and the dog-leg open-gate gearshift required some mastering. It wasn’t all that fast – 0-60mph in 6.7sec for the 308 – but with a bevy of carbs gargling away and a throttle response sharp enough to splice a human hair, it pressed all the right Ferrari buttons.

A piece of 328 trivia – from 1986 to 1989, Ferrari produced a 2-litre version with a turbocharged engine specifically for the Italian market where there were tax breaks for sub-2-litre cars.

Around 20,000 308s and 328s were made in total, and with secondhand values still hovering around the £30,000 mark, they represent a great entry point to classic Ferrari ownership.