Range-topping ST is rapid, but even the regular three-pots have entertaining performance in their higher outputs 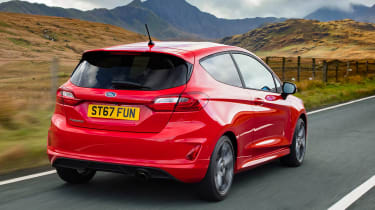 From an evo perspective the naturally aspirated 1.1-litre three-cylinder unit can probably be discounted with its leisurely 14.0sec 0-62mph time. The basic EcoBoost is much more appealing, shedding a whole 3.5 seconds from that figure, though Ford’s inclusion of fourth-gear acceleration from 31mph to 62mph is even more telling – 11.0sec for the 94bhp Ecoboost, compared to 17.5sec for the 1.1. Top speed is 114mph for the EcoBoost, 106mph for the entry car.

Predictably, more power means better acceleration for the other EcoBoosts – 9.9sec to 62mph for the 123bhp car, and nine seconds flat for the 138bhp model, with 121mph and 125mph top speeds respectively. The automatic ’box hampers the basic EcoBoost though, drawing out the 0-62mph time to 12.2sec. 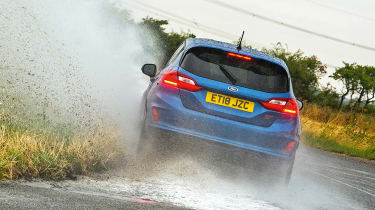 We’d certainly pick any of the EcoBoost petrols over the entry-level 1.1 or the diesel. All have an appealing thrummy character that makes low-speed driving more fun than you’d expect, and with good torque figures all pull well from relatively few revs. In day-to-day driving you don’t even lose out that much by going for the 94bhp car, but flat out the more powerful models do make themselves known.

The 123bhp engine has just enough grunt to really bring the Fiesta’s chassis to life, but the ST is very brisk indeed, pulling hard and with keen responses throughout the rev range. We’re still not convinced a three-cylinder engine makes for the perfect hot hatchback soundtrack, and its four-cylinder predecessor felt more raw, but in most other respects the 1.5 has the measure of the old 1.6.