All petrols have three-cylinder engines, while a four-cylinder diesel is also available. Most use a six-speed manual gearbox, but an automatic is available 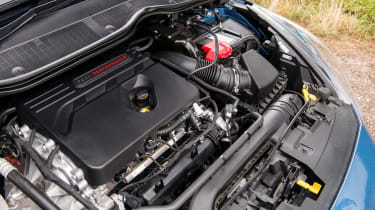 The three-cylinder, 74bhp 1.1-litre normally aspirated engine footing the Fiesta range is one we’ve yet to sample, but its low performance probably won’t endear it to evo readers, especially when you consider that the more powerful EcoBoost engines offer better performance with no penalty at the pumps or in emissions figures either.

Ford expects most buyers to opt for one of the EcoBoost models and it’s not hard to see why. With high-pressure direct injection, four valves per cylinder and twin independent variable cam technology, these Fiestas punch beyond their weight. Ford also reckons its offset crankshaft design on the EcoBoost engine offers excellent refinement.

The first of these EcoBoost units displaces one litre and makes 94bhp with 125lb ft of torque. There are then two further EcoBoost models with escalating power outputs – 123bhp and 138bhp, the first getting the same 125lb ft of torque but 148lb ft on overboost, and the most powerful 1-litre getting a constant 133lb ft output, with up to 155lb ft available for short periods.

Just one diesel engine is now available in the Fiesta, a 1.5-litre TDCi four-cylinder turbocharged unit making 84bhp and a useful 159lb ft of torque. It’s a SOHC two-valve per cylinder unit that employs an optimised combustion chamber design with a variable geometry turbocharger and high-pressure injection – it also offers regenerative charging when braking and coasting. It’s mated to a six-speed manual that’s slick in operation. 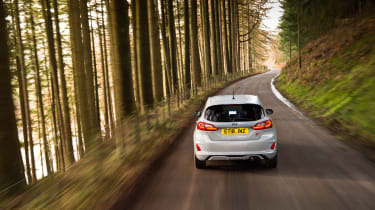 Finally, the Fiesta is offered in ST trim with a 1.5-litre, three-cylinder EcoBoost, making 197bhp and 214lb ft through a six-speed manual transmission. It features cylinder deactivation technology to save fuel – shutting off one of the three cylinders at light loads – while a Quaife limited-slip differential is optionally available.

While the layout is as conventional as other Fiestas, STs also get technology such as force vectoring, directionally wound springs to help better locate the rear axle, and on the ST Performance Edition, uprated and adjustable coilover suspension and lightweight alloy wheels are also included.

Ford thoroughly updated the Fiesta’s underpinnings for this generation. It says there’s a 15 per cent increase in torsional stiffness thanks to an increased use of boron steel, laser welding and stiffer front subframe attachment points. There’s a wider track than on the outgoing model, too, by 30mm at the front and 10mm at the rear, and it’s allowed the chassis to be optimised to accept 18-inch wheels for the first time.

Reworked suspension bushes that are double bonded to be twice as stiff as those on the outgoing car are said to offer a sharper steering response. The updated bushes have also been designed to bulge in a specific way to better isolate road imperfections and work in combination with a rear twist-beam to reduce the impact of small bumps and imperfections in the cabin. Resistance to understeer has been improved thanks to a lighter, stiffer hollow front anti-roll bar, and along with the rest of the changes Ford says this has resulted in a car with 10 per cent more grip than before.