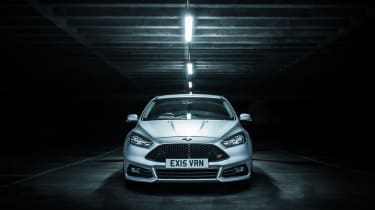 As the hot hatch class climbs towards the 300bhp mark, cars with a mere 250bhp risk being left behind – the latest hatches offer searing pace and chassis to match.

The Ford Focus ST manages to resist this trend, at least on paper. It’s remarkable value, with prices starting from £22,495, but even so it’s still failed to impress us to the same degree as its highly talented rivals – finishing a resounding last in our hot hatchback test in evo 207.

Mountune’s latest tuning package should increase its appeal however, building on one of the ST’s undeniable strengths – its 2.0-litre, 247bhp four-cylinder turbocharged engine.

Called the MP275 upgrade kit, the cost is £1195 including VAT plus fitting, which is the work of two hours. Best of all, it doesn’t affect the factory vehicle warranty.

Whether it affects the way the Focus drives is another matter – even in its previous state, the ST wasn’t wanting for power so much as the means to control it adequately.

There’s little doubt Mountune’s package will have bumped up the thrills however – as our recently-departed Mountune’d Fiesta ST proved in spades.