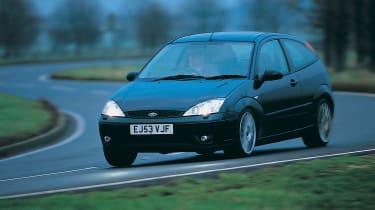 The mk1 Ford Focus RS might steal the limelight but there’s another option if you’re looking for a hot hatchback based on the first-generation Focus: the ST170.

It’s fair to say the ST170 didn’t shine on its debut in 2002. Part of that was due to the increasingly exciting hot hatchbacks available at the time, following the EP3 Civic Type R that kicked the class through the 200bhp barrier, but in part, it seems, it was Ford’s decision to hold back the ST170 just a little given the RS was just around the corner.

Even so, the first hot Focus packed an excellent chassis and handsome styling, and slotted neatly into the space left by the short-lived Ford Racing Puma and alongside the concurrently-launched Mondeo ST220 - the early 2000s was a great time to be a fan of understated but otherwise excellent fast Fords. 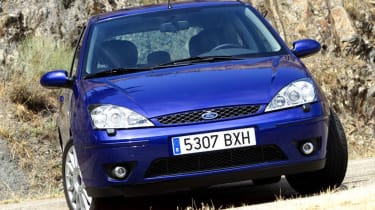 If the Mondeo had demonstrated Ford getting its act together and the Ka and Puma cemented its ability to create drivers’ cars from humble underpinnings, then the first-generation Focus was Ford showing it could create a true class leader completely from scratch.

The Focus differed from the old Escort in virtually every way, save the carry-over of a few Zetec engines, and was all the better for it. With VW’s Mk4 Golf on the horizon Ford had made a big quality push, but when the Golf arrived it couldn’t compete with the Ford’s dynamics and for a company as staid as Ford had been in the preceding decade or two, the sharp “new edge” styling was bang up to date.

With a 128bhp 2-litre Zetec topping the range though, the one thing the Focus initially lacked was a performance variant. That took four years to arrive, with the ST170 finally making its debut in the spring of that year.

The Zetec saw some work to lift its output, with new forged pistons, dual-length inlet tracts, a new cylinder head with larger inlet valves and stiffer valve springs, with variable intake cam timing and a freer-flowing exhaust system. This little lot raised power to 171bhp (unlike modern use of numerics for power figures, ST170 is more of a guide than a PS figure), with 144lb ft of torque.

Ford opted for a six-speed Getrag manual gearbox, which sent power to the front wheels like every other Focus. The fifteen-spoke, 17in alloy wheels were large for the day, and housed 300mm front and 280mm discs behind, with 215-section, 45-profile tyres transferring that acceleration and braking force to the road.

Unfortunately, these efforts were overshadowed by those of the ST’s competitors, which offered more punch or less weight, and it was the Ford’s engine, though willing, which let down the car’s performance overall. The fluid chassis was another story, with great damping and plenty of feedback through the steering, while the subtle cabin turned out to make the RS’s violent combination of blue and black look a little try-hard. 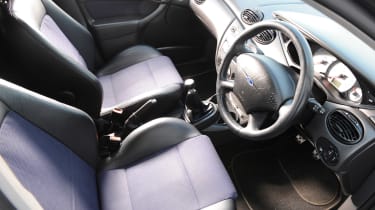 Available with three or five doors or more rarely as an estate, picking up even a good ST170 requires very little cash these days. With the next-generation five-cylinder turbocharged Focus STs keeping a lid on prices from above they’re likely to remain affordable for a little while longer too, but sporty Fords only ever go up eventually...

‘The first few metres of driving tell you an awful lot about Ford’s command of chassis tuning. The damping feels fabulous, the low-speed ride displaying an almost oily suppleness, belying the stiff-sidewalled tyres that barely smear themselves around the 17in rims. The steering also has fine feel, with precise response and keen weighting.

‘While the chassis shines the engine never quite feels its equal. Those tight uphill hairpins make all but the most powerful cars feel breathless...on a less extreme road I suspect the ST would feel more muscular. A bigger disappointment is the gearshift, which lacks the brilliantly wristy shift quality of the standard-setting Puma’s ‘box, or indeed that of the Civic Type R.’