28 years old in 2020, we look back at what made the Escort 'Cossie' significant - and what to look for when buying 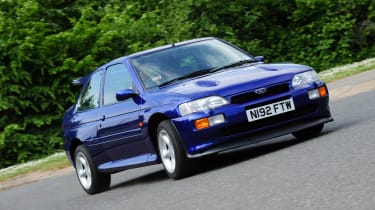 Mechanically, there’s nothing much here that should scare you: Four cylinders, sixteen valves and a turbocharger. Knowing what you’re getting is important though. Early, big-turbo cars feature what’s known as a ‘YBT’ engine, most easily identifiable by their blue cam covers. Later, small-turbo engines are known as YBP units, and are denoted by a smoother, silver-finish cam cover.

High states of tune can affect reliability, so if the car you’re looking at has big power claims then exercise caution. Otherwise, it’s mainly routine checks: excessive oil leaks, coolant leaks (pointing to head gasket failure), and on the test drive, excessive amounts of smoke - blue points to oil issues (piston rings under load, or turbos on the overrun), white again points towards the head gasket. Check the coil and plugs, too - both can cause rough running. 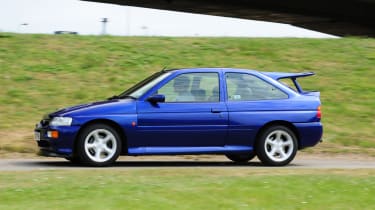 All cars got a MT75 five speed manual gearbox and sent their power to all four wheels. Like the engine, everything here is fairly hardy, but put more power through it and wear will be accelerated, eventually (or quickly, depending on the output) resulting in failures. Synchro rings can fail too - but the ‘box isn’t as slick as a modern one anyway, so you’re looking for crunching and difficult gear engagement, rather than obstinance.

Many older cars are under-braked by modern standards and the Escort Cosworth is little different. Most will have been upgraded by now so the old problems of warped discs may no longer be present (except for on the most original examples), but as a performance car there may well be signs of hard use - so check how much meat is left on the discs and the pads, and use that as a bargaining point.

Likewise, springs or dampers may well have been upgraded by now, but a test drive will reveal any other suspension issues, such as perished bushes or tired dampers.

Most Cosworths are now prized, either as collector vehicles or trackday hacks, and as such most should be visually and structurally good - at least at a glance. Rust is always a problem in old Fords but should be uncommon on well-loved examples, so treat it as a sign that other maintenance may too be being neglected. Chassis damage is always a possibility too - Cosworths tend to be driven enthusiastically - but again, a well-maintained car should have had this corrected professionally.

Interiors are standard 1990s Ford fare - very much not a haven of soft-touch plastics and high build quality - but should still be nicer, and better-maintained, than a bog-standard Escort cabin. The original Recaro leather seats may be looking a bit tired by now - if the owner hasn’t replaced them with buckets for track work. Trim pieces can be hard to come by, even though many are standard Escort from the era. 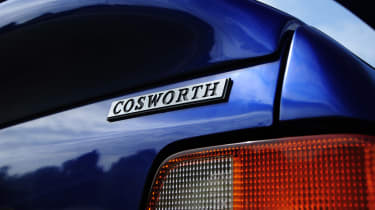 Tyre prices from blackcircles.com. All prices include VAT at 20 per cent

As mentioned earlier, Cosworth prices vary significantly - though have now matched and eclipsed the price the car commanded new in 1992, which is quite an impressive feat. The least you'll pay at current is just shy of £40,000, with some examples listed at an eye-watering £90,000. It may be possible to find examples cheaper, but they’re few and far between and £40k seems to get fairly well looked-after cars. Prices escalate quickly after that - original cars with low miles can reach £60k-£70k and we’ve seen ultra-low miles models, particularly limited editions like the Monte Carlo, above that.