The Mustang has been hit with the all-electric, SUV treatment 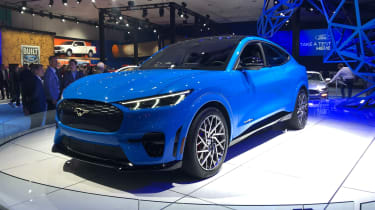 It’s happened. The Ford Mustang has become an SUV, and an all-electric one at that. Though the muscle car we all love will remain on sale, the Mach-E marks the beginning of a new range of practical EVs from the US marque. We expect a high-performance GT variant from launch and an even more potent Mach-E Shelby in 2021.

Design cues from the iconic muscle car are clear, with strong real haunches, tri-bar rear lights and an aggressive front grille all making an appearance. Inside however, there’s space for five, and more luggage room than you’d expect to find in a combustion-engined rival, thanks to the lack of an engine under the bonnet.

Two battery pack sizes, three power outputs and both RWD and AWD variants are currently available, but Ford has confirmed it will launch a ‘GT’ performance version, likely to rival the 402bhp Mercedes-Benz EQC and Audi E-tron in the future. Murat Gueler, chief designer for Ford of Europe, told sister title Auto Express that the brand is targeting a sub-five-second 0-62mph time and a power output of 458bhp and 612lb ft of torque for the range-topper.

The base level Mach-E offers only a single-motor, RWD set-up, with the smallest 75kWh battery pack offering 255bhp, and the 99kWh pack 281bhp, both sitting at 315lb ft of torque for a 0-62mph time in under eight seconds. Though this is the base model, it boasts the most range of the offerings – either 280 or 370 miles (WLTP) depending on the size of the battery pack. For comparison, the Mercedes-Benz EQC offers almost 100 miles less range, at 279, with even the once class-leading Tesla Model X sitting at just 314 miles of WLTP range. 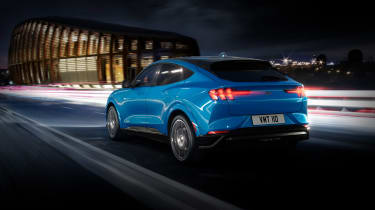 Move up the range and you’ll find a dual-motor, AWD variant, with either 75 or 99kWh battery packs for 260 or 335 miles of WLTP range, a more substantial 429lb ft of torque and 254 or 332bhp respectively. Specifics on performance are yet to be provided, but a sub-seven-second 0-62mph time is quoted, with weight sitting at a hefty 2218kg for the 99kWh variant. All cars have a 111mph top speed.

Inside, the focus is the Tesla-esque 15.5-inch touchscreen, aiming to minimize the number of physical buttons in the cabin to simplify the user experience. Should you spec the technology package, you’ll receive features such as an uprated ten-speaker B&O sound system, Advanced Active Park Assist and Active Drive Assist with Lane Centring.

£40,270 will afford you the base-level Mach-E, with the AWD carrying a £6000 premium and the limited-run First Edition costing from £58,000 - this puts even the most expensive variant under the EQC's £65,640 starting price. Orders can be made only on the brand’s online marketplace, and first cars are set to hit UK shores in late 2020.