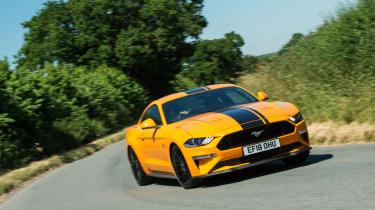 If there is one undeniable fact about the Mustang, it’s that a small sporting coupe it is not. The Mustang is wide, long, and feels totally out of scale with most British driving roads. The Mustang has been on independent rear suspension for a while now, so it’s nothing like as unsophisticated as pony cars of old, but it’s still night and day to modern European coupes like a BMW 4-series. Not that the new Mustang is bad, of course. It’s just a very different experience to one that us Europeans might be used to, and there is a lot to be said for that.

There’s a fluency to the car’s responses and a reasonably settled ride quality despite the relatively large 19-inch alloy wheels. It’s a fairly intuitive car to drive quickly, with a consistency and natural-feeling weight to the steering and a nice balance. Unfortunately, there’s little actual feedback through the steering, which means there’s some second-guessing when approaching the limits of the chassis.

But the Mustang also lacks body control – the dampers sometimes struggle to keep track of the car’s mass, making it difficult to confidently ascertain where the weight is within the chassis. And weight there is, as the Mustang feels every one of its 1800kg-plus figure. On expansive US roads the Mustang calls home, you’d probably not notice, but on the sort of broken B-roads found across the UK it results in the Ford feeling a little out of its depth – a little flustered and ponderous. And, despite that 21st century rear axle, the body moves laterally, swaying on its suspension as if there is a seperate chassis underneath. 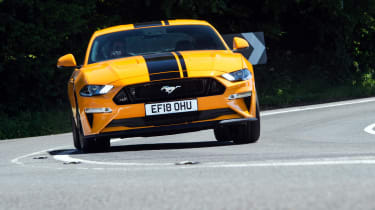 Recent experience with a Mustang equipped with a Koni Sport suspension set-up reveals only a little adjustment is needed to tease out the car's potential though. With more body control and a lower ride height the 'Stang is at once a little more planted and a little more exploitable, without destroying the decent ride quality.

The EcoBoost removes some weight from over the nose (overall the car is 65kg lighter) which improves turn-in and reduces body roll. It’s not as adjustable on the throttle as the V8 though, and suffers the same damping limitations as its brawnier brother.

The Mustang’s brakes are strong, but their responses leave something to be desired. Bite is almost instant and the pedal travel is quite short, making smooth, progressive braking more difficult than it should be. Wide spacing between brake and throttle pedals, and that grabby initial bite, also makes heel-and-toe downchanges difficult. Incidentally, it's a problem not nearly as bad in the left-hand-drive car we drove most recently.

Despite these issues, the Mustang is still a lot of fun. Drive it below its limits and stick to smoother tarmac and it becomes much easier to appreciate the car’s good balance and progressive responses – and in V8 GT form, the engine and manual transmission add a great deal to the experience too. 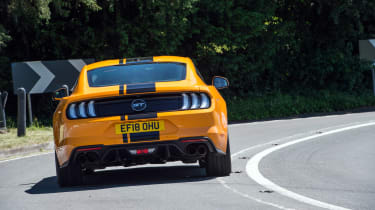 The Shelby GT350 is equipped with Michelin Pilot Super Sport tyres, adaptive MagneRide dampers, a torsen limited-slip differential, and that 5.2 flat-plane crank V8. It is the most exciting Mustang you can buy, but the GT350 does lack any real feel at the front end. The large, 295-section front tyres mean that there is plenty of grip – you just can’t feel it.

At seven-tenths the Shelby feels slightly cumbersome and aloof. You can’t tell if the tyres are keying into the road surface on the first application of lock, and you don’t have the confidence to get on the power early.

Learn to trust the tyres however and launch the GT350 into bends and it starts to feel alive and more enjoyable – much more like the car you expect it to be. The braver you are with the Shelby, and start to throw the front into corners, you begin to feel the car move around beneath you. It’s extremely exciting, but a very physical experience.

The more extreme GT350R uses the same 526bhp V8 and magnetorheological dampers as the regular Shelby, but to help its on-track behaviour it also has a new aluminium front hub, rear coil springs that have been wound in the opposite direction so that the two corners of the suspension are an exact mirror image of one another, thicker front and rear anti-roll bars, and rigid bushes. It’s also fitted with carbonfibre wheels shod in Michelin Pilot Sport Cup 2 tyres.

The result is a dramatic transformation from the basic 5-litre Mustang GT. It’s sharp, very fast, balanced and, most surprising of all, incredibly grippy.