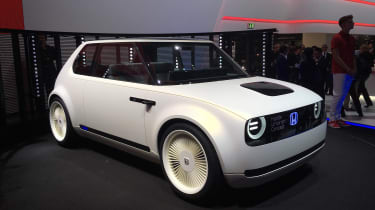 The electric Honda Urban EV Concept that stole the show in Frankfurt last year will be put into production from early 2019 according after a discussion with Honda at the 2018 Geneva motor show.

Destined to be the first in a range of electric vehicles from the Japanese manufacturer, the Urban EV Concept’s styling should retain its cheeky retro vibe, with inspiration taken from the original Honda Civic from the early 70s. We should get our first look at the production car late this year, with orders being taken soon after. 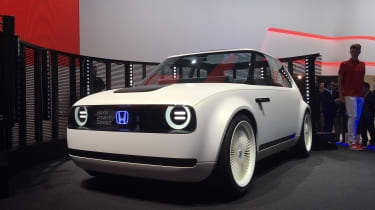 Honda has not revealed any specifics in regards to powertrains or expected range so far, but we’re betting on a range in the region of between 100-200 miles from a single charge is likely, as the diminutive dimensions and low asking price will probably limit what is reasonably at the Urban EV’s eventual price point.

The Concept’s overt retro influence is punctuated by modern detail, from the LED headlight surrounds to the white multi-spoke alloy wheels and pair of message boards integrated into the front grille and rear deck. The doors are also rear-hinged as on a Rolls-Royce Phantom.

The diddy dimensions cast a relatively square footprint, and it should measure 3.9m long with Honda saying it’s 100mm shorter than a Jazz, but 350mm longer than the original Civic. VW’s Up occupies 3.6m worth of road lengthways for comparison. 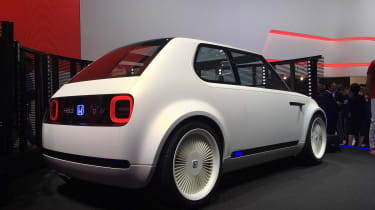 The cabin is certainty no pastiche – it’s all modern. A duo of widescreens dominate, with one mounted atop the cabin-wide, floating dash below the curved windscreen. There are bench seats front and rear, so how to access the second row is anyone’s guess, but there’s an appealing lounge-like aura to the interior. 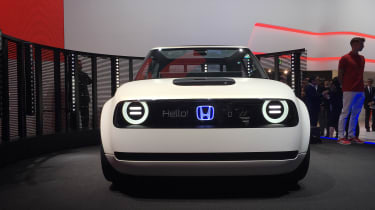 During the Frankfurt motor show Honda explained the Urban EV Concept marked the first act in its electrification strategy: by 2030 Honda plan for two-thirds of sales to consist of electrified vehicles.

That's less ambitious than some, but among the models will be basic hybrids, plug-in hybrids, full battery-electric vehicles and fuel cell vehicles - the latter of which Honda already sells in the form of the Clarity.

The company established a new EV division within its R&D facility back in October last year, which will carry out the necessary research to facilitate Honda's plans.

And those targets will actually be accomplished sooner in Europe, which Honda sees as a particularly important market for electrified vehicles. Expect to see more concepts like the Urban EV in the future, then...