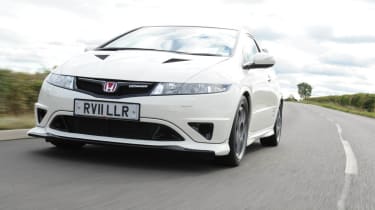 What is it? A development of the 2-litre Mugen Civic that arrived a couple of years back. It’s effectively a last hurrah for the K20 Type-R engine (decommissioned in 2010 thanks to European emissions regulation) and all the changes here have been confined to the engine bay. The bodywork and suspension remains the same as it did on the original Type-R Mugen (review here). Technical highlights?

The cylinder bore and stroke have been increased to create an overall capacity of 2156cc, and naturally both power and torque have increased; the 2.2 has 256bhp (up from 237) and 177lb ft, which is 20lb ft more than before. When you compare these figures to a regular Honda Civic Type-R they are both up by 30 per cent.   What’s it like to drive?

Manic. There’s no subtlety here, the motor has a rorty induction bark that becomes a scream above 6000rpm where the hot cam lobes come out to play. This is where you need to be to keep it on the boil, which means revving the thing to the redline. It rides 10mm lower than regular Type-R Civics and rolls on lightly grooved Yokohama Neovas, which means the ride is firm (but not uncompromisingly so) and you need to work up a bit of heat before they offer up the high grip levels you expect. When they do, it corners flat and hard.

The diff does its best to contain the rampant surges in the slow speed stuff, but you still drive this car on the front axle, loading it to as much as it’ll take, because it’s cornering angle is not particularly adjustable on the throttle. It requires you to think about your driving, but on the right road when you’re in the right mood, it can deliver a big hit.  How does it compare?

The torque spread is better across the engine’s range, but as the action still only really happens in the upper echelons of the rev-counter, in reality it feels very similar to the version that went before, with a tad more punch down the straights. It’s a far more hardcore proposition than say, a Renault Megane 265 Trophy (review here) and requires more from the driver to extract the best from it. The Megane has a wider powerband and a better overall balance, but the Civic is more extreme and bespoke.  Anything else I need to know?

A limited run of 20 2-litre Mugen Civics were originally sold with a price tag of £38,599. Of those, four remain unsold and it is likely that all of those will be converted to 2.2 spec and that it will be possible for current owners to upgrade their cars. A final decision had yet to made on this and on the price of the upgrade.

Read our review of the original Civic Type-R Mugen here