The Gordon Murray Group is to move to a new HQ in Windlesham, Surrey, with a three-phase build project due to be completed by 2024. 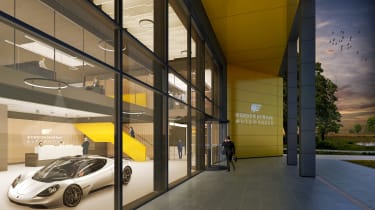 The Gordon Murray Group is to move to a new HQ in Windlesham, Surrey, with a three-phase build project due to be completed by 2024.

The 54-acre site, situated alongside the M3 motorway, was formerly the home of the BOC Corporation until it closed in 2007. The firm’s all-new 130,000 sq ft facility, built on the existing land, will house the Group’s automotive design, engineering, research and development teams, plus sales and marketing and a heritage centre in due course. It’s a £50 million pound investment that’s been funded by Murray’s existing investors, and will lead to the creation of 100 new jobs. 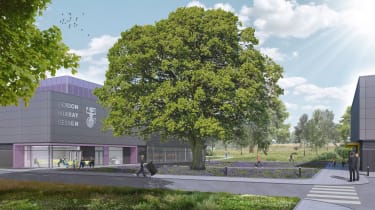 Murray describes the new buildings as “low-energy, practical and usable” as well as “lovely buildings”, and adds they’re not a “show off showcase like MTC” in reference to the Bond-esque, labyrinthine headquarters of the McLaren Group nearby. “Our innovative new technology campus is a fantastic new home and will give us world-class facilities that have been designed with a lot of attention to communication, workflow and social interaction – which will bring new levels of productivity to our already very efficient team. My experience with Brabham and McLaren is when you get scattered over too many locations the communication breaks down”. There are even plans for a small test road, where every car built at Windlesham can be run off the line, including 100m of Belgian pave.

Phase one, due to be completed at the end of 2022, will see the Sales, Marketing and Tech teams move in, although the site should be initially operational by the beginning of next year for vehicle development. Phase two encompasses engineering, due to open in 2023, and phase three is the R&D and vehicle servicing departments due the year after. The Group’s Dunsfold Park site will be retained and converted in May of 2021 to the manufacturing site for GMA’s T.50 hypercar. Meanwhile, the current HQ at Shalford will be kept until the WIndlesham site is completed in its entirety. Tantalisingly, Murray reveals the next car from GMA will ‘come from Windlesham’. 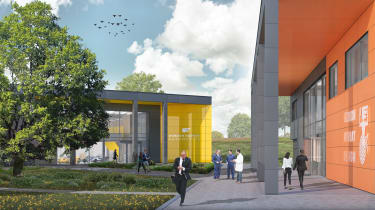 At present, the plans don’t include a use for the striking BOC building, shaped from above like an oxygen molecule, but Murray admits he does have “a long term plan for it”.

Meanwhile, progress is ongoing with the T.50 in spite of the ongoing worldwide pandemic. The first two prototypes (from a planned total of 11), known as XP1 and XP2, are in-build as engine test cars, while ‘George’, the engineering mule that’s an Ultima with the new Cosworth V12 in the back, has been running at the Millbrook test facility now for a month. Murray has taken a two-year lease on a garage at the Bedfordshire test track to ease logistics in the development process. The designer also let slip that Cosworth has found 720bhp from the S-spec engine (the track-only version of the T.50), and that the ‘S’ itself has come in under the planned 890kg weight target.