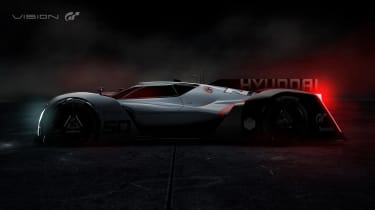 Hyundai will launch its ‘N’ high performance sub-brand at the Frankfurt motor show with the unveiling of its 2025 Vision Gran Turismo. Two new pictures have been released today, adding to the previous teasers to provide us with a glimpse of what the virtual racer will look like, and hint at the design direction the South Korean carmaker will take with its future line-up.

In the first of the two new images, the car's ultra-low side profile appears to take influence from today's grid of Le Mans Prototypes, much like Mazda's LM55 Vision Gran Turismo (which was unveiled last year). And the second reveals the rear's thin, sharply angled lights, which match the virtual racer's angular wheels to give the car a futuristic look. No technical details have been revealed as of yet – we expect to find out more in Frankfurt. 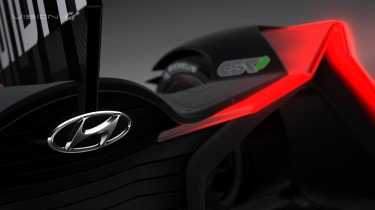 The 2025 Vision Gran Turismo’s arrival suggests Hyundai intends to create more striking cars with links to motorsport, and the launch of its N sub-brand confirms it wants them to be fast too. The brand has plenty of engineering expertise to draw on to create fast vehicles – evident with its involvement in World Rally with the i20 WRC, which grabbed its first rally win at the 2014 Rallye Deutschland driven by Thierry Neuville.

Our experience with fast Hyundais is limited, and a recent drive in the i30 Turbo – which the carmaker markets as a warm hatch – left a lot to be desired. While its chassis showed signs of promise, its engine felt lukewarm at best. But if we think back to our time with the Hyundai Coupe (some nine years ago), we remember a car with a balanced chassis and energetic engine – so we have high hopes for a more focused N range. 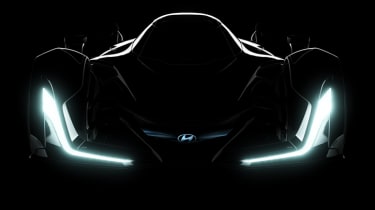 Also on display in Frankfurt will be Hyundai’s RM15 concept, a 296bhp 2-litre mid-engined take on the Veloster that can accelerate from 0-62mph in a claimed 4.7sec. Like Hyundai’s new virtual racer, the RM15 is to remain a concept, but it helps to emphasise Hyundai’s desire to make fast drivers’ cars. Hyundai will also present its 2016 i20 WRC car, a car due to make its competitive debut in next year’s championship.

We’re still not getting the Veloster N, but we will get its new eight-speed dual-clutch ’box in the updated i30 N later this year
455bhp Alpina B3 Touring priced from £67,950

Following its reveal at 2019's Frankfurt motor show, Alpina has unveiled pricing for its take on the BMW 340i Touring