Not a car to make you grin on a twisty road, but ride and refinement are both Q30 trump cards 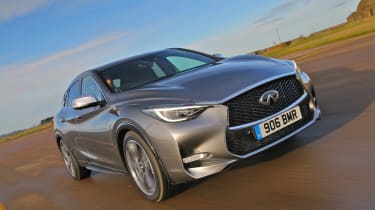 If outright performance is your aim, the Q30 that snaps to 62mph in the quickest time is the 2-litre Sport with its standard dual-clutch transmission, and front-, rather than all-wheel drive. It completes the sprint in 7.2sec, while its all-wheel driven counterpart takes just a tenth longer. Neither is as quick as the most mechanically-similar Mercedes-Benz A-class, the A250 AMG, which reaches the 62mph mark in 6.3sec. That's despite the pair weighing in at similar amounts (the Q30 2.0t Sport is 1427kg), though the Mercedes does have a little more power.

What's clear is that there's no truly rapid Q30 – certainly no AMG A45 equivalent - and even that 2-litre can feel sluggish. The normal gearchange mode of the DCT dulls throttle response and results in early up-changes that futher hold back progress. Like the equivalent Mercedes, you can push a button to activate a Sport program, which livens things up. This is undoubtedly preferable, but it's a shame you can't pair the sharper throttle response with earlier gearchanges for normal driving – Sport mode hangs onto lower gears for much longer which harms refinement and economy. 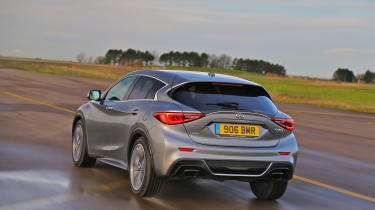 The ideal option is to use the paddles mounted on the back of the steering wheel for manual changes - but since the Q30 isn't a particularly sporty car in the first place, we can't see many buyers defaulting to this mode. There's not much satisfaction to it either – shifts are smooth, but not the snappiest.

We're yet to try out the other Q30 engines but of the remaining options it's the 2.2 diesel that's quickest, with an 8.3sec 0-62mph time and a 137mph top speed. Given that even the 2-litre petrol can feel sluggish, we'd not expect much from the 1.6t (9.4sec to 62mph with the manual 'box) or the 1.5d (a whole 12 seconds over the 0-62mph sprint). Since manual models use the Merc's six-speed gearbox, we know it's not the most tactile of shifts either.