JLR’s Special Vehicle Operations finally gets its hands on the Jaguar F-Pace, and the result really is a bit special 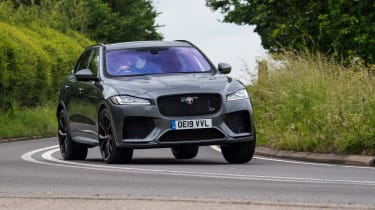 It's no secret that here at evo, our idea of all-purpose, all-weather wonderful is a high-performance, four-wheel drive estate – something along the lines of a Mercedes E63 S 4Matic Estate or an Audi RS6 Avant. But market trends beg to differ, so in the process inventing the comparatively recent phenomenon of the super Sports Utility Vehicle, cars represented by Porsche’s robust balance sheet as exhibits A and B.

Which is why, if you’re a default setting sort of person, you’ll probably gravitate towards a Porsche Macan Turbo, Porsche having more-or-less invented the modern interpretation of the genre with its larger Cayenne. You wouldn’t go far wrong with either, but JLR hopes you’re feeling a little more adventurous than that. With hardcore numbers on the Range Rover and Jaguar F-type already delivered, there was never much danger the group’s Special Vehicle Operations (SVO) division would overlook Jaguar’s take on what is seemingly becoming the world’s most popular form of transport.

The F-Pace SUV has done wonders for Jaguar’s bottom line and the SVO’s SVR edition promises to do the same for the F-Pace’s performance. It’s a familiar formula and, predictably, one that starts with some big numbers. Although entering the twilight phase of its life, the supercharged 5.0-litre petrol V8 shared in various models by Jaguar and Land Rover is a reliable and charismatic powerhouse and, for this application, develops 542bhp and 501 lb ft of torque – figures that comfortably eclipse the Macan Turbo’s though, with the Porsche being significantly lighter than the SVR’s two-and-a-bit tonnes, accelerative abilities are pretty even, the Jaguar sprinting to 62mph just 0.1sec sooner in a faintly absurd 4.3sec and adding just 7mph to the Macan’s top speed at an equally unlikely 176mph.  Spreading the load is four-wheel drive, of course, and it’s dished out via an 8-speed auto transmission.

Weight saving? If there was anything substantial, it never escaped from the drawing board, but new lightweight forged alloy wheels and a larger and lighter brake package trims a few kilos from the un-sprung side of things. A new Variable Valve Active exhaust system removes a further 6.6kg from the standard plumbing, and also promises a more sonorously sporty soundtrack for more of the time.

Making the car’s mass less of a dynamic burden naturally falls to the chassis. In a bid to reduce body roll (by around 5 per cent) the front and rear springs are 30 and 10 per cent stiffer respectively, and teamed with a new anti-roll bar set-up and uprated dampers. For the first time on an F-Pace, the rear wheels are 25mm wider than the fronts, the better to hook up all that torque and increase overall grip. And the SVR is the only F-Pace to use the Electronic Active Differential from the F-type, albeit recalibrated for the SVR. The electronic power steering and gearshift speed gain sharper responses in ‘Dynamic’ mode, too. 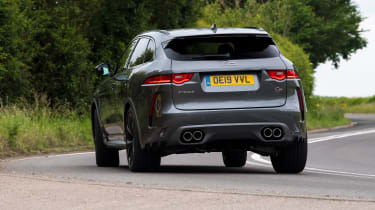 Visually, the F-Pace body takes well to a spot of assertive aero and the meatier undercarriage. The go-faster tropes are familiar enough – larger air intakes and vents, swollen wheelarches, shapelier sills – but it’s all sympathetically executed and successfully makes the F-Pace look a little wider, lower and more muscular without unduly emphasising its bulk. The bonnet’s extra cooling intakes give a nod to the serious business beneath while, at the back, the inevitable ‘diffuser’ might not do much diffusing but it does house four burbling exhaust pipes.

On the inside, it’s all embossed SVR logos and diamond quilted slimline sports seats, those in the back pleasingly mimicking the fronts without compromising the ample leg and headroom. Other aesthetic flourishes include a new gear selector and steering wheel, Jaguar’s Touch Pro 10-inch touch-screen infotainment system and slightly larger digital instrument cluster.

The F-Pace SVR pulls off the merging of pace and portliness in some style. It’s at its very best dialled a hair or two back from being ragged mercilessly. Although it’s tempting to treat it as such, it isn’t a giant hot hatch. No, composure doesn’t crumble at full effort and its mass remains doggedly controlled – it’s just that it isn’t as well disguised and the awareness of weight, if not its physical impact, is something of a party pooper.

At eight-tenths, the SVR effortlessly rips along any road you find yourself on without the need to use all of the 542bhp, soundtrack morphing between soft V8 burble and resonant bellow as it bounces off the scenery. Driven like this, Jaguar’s SUV feels impressively planted, pliant and progressive. The steering isn’t dripping with detailed feedback, but it is direct and well weighted. It means the SVR can be placed precisely and directed with a lightness of touch remarkable for a big, heavy SUV, tacking into even the tightest of bends with minimal coercion from the helm. Not even the Macan Turbo feels as instinctively biddable as this. Or rides as comfortably, even though our car was fitted with the optional 22-inch wheels. Best of all, the chassis treads a deft line between suppleness and control which is very Jaguar. 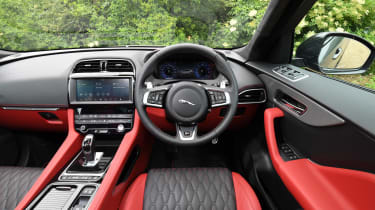 It’s at the polar ends of this eight-tenths operating window the SVR comes across a hurdle or two. Its low speed ride remains remarkable considering its weight, the size of its wheels and the lack of depth to its tyre’s sidewalls, and the performance requirements of its damping. But the V8 can be a little befuddled and slow to respond when you need to make a break for it with the eight-speed auto responds in a similar way, with down shifts slower than expected no matter the driving mode selected and the shift option used (auto or using the DIY paddles). Wind the power back and a more relaxed powertrain feels like the answer. Perhaps the new F-type’s 450PS V8 motor could its way into the F Pace. Have we really asked for a less powerful performance model…?

At the other end of the spectrum, the F-Pace SVR has lost some of the standard car’s fluidity when being hurried near its limit. The flow through the chassis is replaced with a tautness that can make the SVR more binary and less linear in its approach. More weight over the front axle compared to smaller engined derivatives will be a factor, so too more grip across front and rear axles. Even so, the F-Pace remains a finely honed product and more evo than the majority of its rivals.

The recently revised Porsche Macan Turbo starts at £68,530 and while it retains it hot hatch like dynamics and compact dimensions its new 2.9-litre turbocharged V6 is neither as punchy, charismatic or as responsive of the larger 3.6-litre it replaced.

Alfa Romeo’s £70,900 Stevlio Quadrifoglio remains the most evo of SUVs, its twin-turbocharged motor bristling with verve, bravado and a punch to knock the living daylights out of the competition. That it has the most performance car like dynamics of any SUV is also a bonus.

You could also consider BMW’s X3 and X4M Competition models, but seriously why would you?