The F-type is unique in the Jaguar range but on-par with its grand touring and sports car competition in not offering a diesel powerplant. Such things would be ruinous to the car's character of course, and Jaguar has done well to stem the drinking habits of the V6 and V8 options available. The new four-cylinder engine brings about genuine economy improvements, giving those who simply like the F-type's styling a way of achieving that without paying through the nose on fuel, VED, or BIK rates.

39.2mpg is the crowning figure for the new model, irrespective of trim level or whether the car is convertible or coupe. That's actually 1mpg better than an equivalent four-cylinder Porsche Cayman, so the benefits of the new engine both in isolation and compared to rivals are most obvious here.

Given the equivalent automatic-transmission V6 cars achieve only 33.6mpg on the European combined cycle, that's another big benefit to the four-pot. Manual V6s drink even more, at 28.8mpg. Neither of those figures are quite to the standard of Porsche's latest turbocharged 911 Carrera, which achieves 34mpg despite shaving a second from the Jag V6's 0-60mph time and adding 20mph to its top speed, but for a heavy, supercharged sports car it's not horrendous. 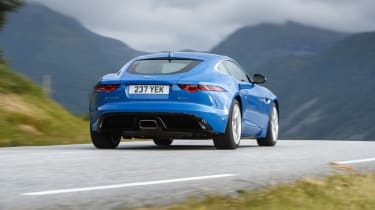 All the V6 F-types consume a gallon of fuel roughly every 30 miles, while the 5-litre V8 models drop that to the mid-twenties. Two-wheel drive cars are slightly more frugal, at 26.4mpg, while AWD cars (SVR included) guzzle at a rate of 25mpg.

Expect tyres to be a significant cost too, particularly at the rate rear-wheel drive models get through their back rubber. Rear boots on a V6 S with the smaller 19in wheels cost around £180 apiece fitted, for Pirelli P Zeros from blackcircles.com. All F-types sit in insurance group 46E or above.