Launched in 2013, age hasn't yet wearied the F-type's design. It still turns heads out on the road and in the right colour and trim combination it's still immensely appealing - there have been moments on group tests where, while not entirely enamoured with the Jaguar's abilities in light of its competition, the shape has still demanded 'one last look' when paying for fuel or frequenting a greasy cafe.

It's arguably its best in coupe form, but in convertible guise there's still plenty to like, from the squat stance, to the slim head and tail-lamps, and the pronounced haunches at the rear.

The F-type isn't perfect; it doesn't have the elegance of its historical predecessor, the E-type, nor does it have the clarity of design of an Aston Martin Vantage. The R's bodykit can look heavy-handed in some colours, and the oblong front grille is rather nondescript. 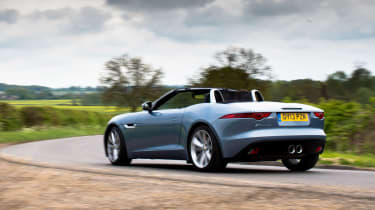 The SVR’s bigger air intakes make it look suitably aggressive, without being over the top. However, the rear wing doesn’t look as considered. You can choose to have the standard car’s wing, but then the Coupé won’t achieve 200mph – a compromise too far?