There are three engine configurations available, and all are available as either a Coupé or Convertible. Kicking off the range since mid-2017 is the four-cylinder car. You'll recognise this "Ingenium"-branded engine from various vehicles across the Jaguar Land Rover empire, including but not limited to the XE, XF and F-Pace.

In this application it's at its punchiest, using turbocharging to extract from only 1997cc a power figure of 296bhp at 5500rpm. That seems fine at a glance, as does the 295lb ft of torque on tap across a wide 1500-4500rpm band, but it's worth pointing out that both those figures are eclipsed by several hot hatchbacks these days.

The trouble is, despite Jaguar's efforts to shed weight, the F-type four-cylinder's 1525kg kerb weight is nothing to shout about (and, if previous Jaguars have been anything to go by, it'll be more than that once we measure it ourselves), so the new car is perhaps ever so slightly undernourished. The transmission is an 8-speed ZF automatic, and four-cylinder cars are rear-drive only.

It is at least quite responsive, particularly when the car is flicked into Dynamic mode, which doesn't bring about the irritation of needlessly low gears like it does with many makers' sport modes, but does improve the choice of gears and brings about better throttle responses. But as the on-paper figures suggest, it could do with just a little more punch - a shame, since one area Jaguar could have got so very wrong, that of its sound, isn't actually too bad. There's a deep-chested growl from the exhaust, and one that entirely hides any inherent blandness the Ingenium engine might otherwise have.

Next up are a trio of supercharged 3.0-litre V6 models. The standard car has 335bhp and 332lb ft, while the S gets a boost to 375bhp and 339lb ft with the added bonus of a limited-slip differential. A ZF eight-speed automatic gearbox and a six-speed manual are both available in the rear-wheel drive cars but the auto is the only option in the AWD S variant. The third V6, using the same automatic transmission and also featuring either rear- or all-wheel drive, is the 400 Sport. As the name suggests, a 400PS - that's 395bhp - version of the V6 makes it the most powerful V6 F-type. Torque is rated at 339lb ft, identical to the 375bhp version. 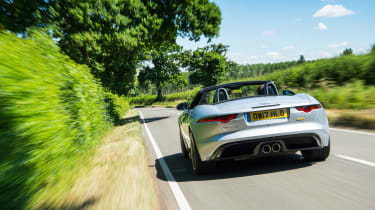 It is a nicely responsive engine, particularly with the tightly stacked ratios of the eight-speed auto, with punch coming as soon as you get on the throttle. The power delivery is very linear throughout the rev-range, something that is actually reflected in the soundtrack from the slightly hollow, blaring exhaust, which can be a little monotone. There is certainly some flare to the way the engine sounds though, with big parps on the up-changes and crackles on the way back down too if you have the sports exhaust activated.

It is worth mentioning that the manual gearbox in the V6 has a decent shift, even if it can’t match the best from Porsche. The action is a touch rubbery in the way it engages, but it doesn’t baulk at fast shifts. The pedals are also very well spaced for heel and toe work.

The second engine option is Jaguar’s familiar supercharged 5.0-litre V8 available in the F-type R and SVR. This puts out a very robust 542bhp and 501lb ft of torque in the R, which is transmitted to the rear wheels via an electronically controlled limited-slip diff. The eight-speed auto is the only option with the V8 regardless of how many wheels are being driven.

It is a very muscular engine with more than enough grunt to overwhelm the tyres at will in the RWD version. As you might imagine, the heavy punch of the torque-rich V8 is matched by a fairly bombastic soundtrack. The quad exhausts (split into two pairs – the V6 gets a single, centrally mounted pair) deliver a raucous miniature explosion on every aggressive upshift and the pops on the overrun are even more exuberant than in the V6. This is not a car for shrinking violets.

Even with 567bhp the SVR models don’t feel much quicker than the R but are just as rowdy. Although the pops and crackles are slightly crisper and sharper than the R.