Proper drop-top supercar or a grotesque caricature that seems a bit confused? We drive the open-top F-Type SVR 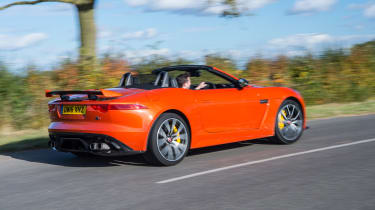 The Jaguar F-type SVR Convertible’s exhaust system is made of such exotic materials that it almost seems like a shame to blast noxious gases through it. The titanium and Inconel pipework saves 16kg compared with the F-type R’s exhaust, which is a very good thing. Jaguar says it emits a ‘distinctive rumble’, which is a lie.

The serrated, tuneless blare – like a woodpecker digging directly into your skull – that fires from those four exhaust tips is no more a rumble than Eric Pickles’ post-vindaloo flatulence is a pitch-perfect aria. From inside the cabin the SVR’s soundtrack under full throttle has the offensive, irritating quality of a distant leaf blower or quad-bike engine, with no musicality or variation through the rev range.

That’s true when the roof is down, at least, because with the canvas hood – or better still, the Coupe’s fixed metal roof – protecting your eardrums from the worst of the din, the SVR’s soundtrack can be quite fun, albeit in an unsophisticated, attention-seeking sort of way. 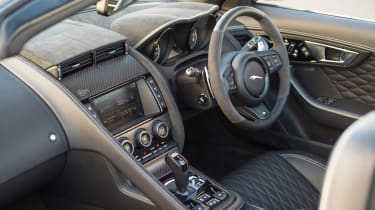 There’s also something uncouth about the tacked-on rear wing that’s specific to the range-topping SVR models. Again, the spoiler works better on the Coupe, but on this Convertible it looks more like a pram handle than an aerodynamic device. Thankfully it can be deleted, and the standard deployable rear spoiler installed instead, for no cost.

Aside from the revised bodykit and new exhaust, the SVR also gets a touch more power from its supercharged V8 (567bhp plays the F-type R’s 542bhp) and bespoke chassis tuning, too. The modifications to the all-wheel-drive system are detailed rather than comprehensive, though, the result being that it takes a forensic understanding of both versions to identify the handling differences out on the road.

What’s immediately apparent, though, is that the SVR is rampantly fast. It accelerates with such force (matching the Coupe to 60mph, at 3.5sec) that your first instinct is to lift back off the throttle pedal, which, incidentally, elicits an immediate and precise response. The eight-speed auto ’box is generally very good, but in terms of shift speed it’s outpaced by the latest twin-clutch transmissions. 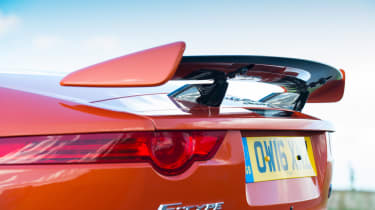 Dynamically, this is a complicated car to both understand and describe. There’s enough agility and grip to carry huge speed, but on a tricky and bumpy road the SVR needs to be wrestled rather than tickled along. The suspension feels stiff over lumps and bumps, particularly at lower speeds, which hints at rock-solid body control, but in reality the body movements during cornering, braking and even under acceleration are very pronounced. The car also hunts ruts and cambers enthusiastically.

There’s a slight instability under heavy braking, too. Enough to drag the steering wheel through your fingers if you’re not grasping it firmly. All this means the SVR is rather busy across a typical British country road. You had better be holding on to it.

You should be deliberate with your inputs, too, committing fully to the throttle early and relying on the AWD to deploy the torque rather than hovering over the pedal hesitantly at corner exit. On the approach to a bend you also need to turn in hard enough to make the car sit down heavily in the corner – if you’re too timid you won’t compress the springs enough to push through the sloppy, slightly woolly initial phase of travel. 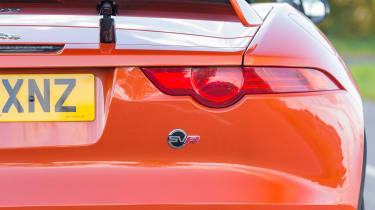 Driving the SVR quickly is a bit like learning to parallel turn on skis – you can try to build up to it all you like, but there comes a point where you have to take a small leap of faith and really commit to the turn with confidence.

The trouble, though, is that the massive straight-line performance, aloof yet hyper-responsive steering, exaggerated body movements and the fact that it fidgets over the road surface mean the SVR is not a car that inspires confidence right away. That comes with time – perhaps more time, we’d suggest, than the typical driver will be able to tolerate that infernal soundtrack.