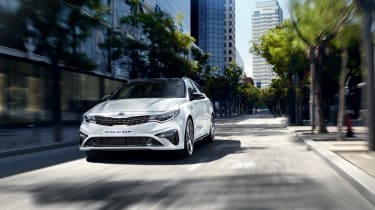 Kia’s Stinger GT is far from impractical, but if you want a proper estate car with a Kia badge, you currently have to look one step further down the range to the Optima line.

Now, Kia is offering the Optima in GT form, and while you don’t get a 3.3-litre V6 and rear-wheel drive like you do in the brawniest Stinger, you do get a 2-litre turbocharged four-cylinder from further down the Stinger range, albeit one detuned from 252bhp to 241bhp at the same 6000rpm.

The T-GDI unit also produces 260lb ft of torque between 1400-3500rpm (identical to its bigger brother), and is good for a 7.3-second 0-60mph time. The 2-litre’s efforts are sent through a standard six-speed automatic transmission (with paddle-shifters) driving the front wheels. Kia's fitment of a sound generator should enhance the engine note inside the cabin, though we’ll believe that when we hear it...

Combined consumption is 30.7mpg, which puts it some way behind the diesel and plug-in hybrid Optimas, but the GT will always be a niche option in the historically conservative mid-sized segment.

Importantly, the GT should handle better than other Sportswagons - which already fare better than previous Optimas thanks to the ongoing input of the man behind much of Kia and Hyundai’s recent increasing presence in evo, Albert Biermann. A couple of years back Biermann told us he’d sent the engineers back to the drawing board with the GT to ensure it was worthy of the name, and Kia claims the car has been tuned specifically for European roads, featuring a bespoke suspension setup, revised steering and improved, 30mm-larger brakes.

Electronically-controlled dampers are standard on the GT, adjusted between Normal, Sport, Smart and Eco modes, while GTs also sit 10mm lower on stiffer front and rear springs, aided by thicker anti-roll bars and firmer bushes at the rear.

Inside the standard Optima interior makes way for red and black leather sports seats with red stitching and embroidered GT logos, with comfort improved by eight-way power adjustment and four-way lumbar adjustment for the driver, and heating for all four pews. A sports steering wheel, alloy pedals and unique instrument cluster also feature - the latter including a boost gauge and torque display.

There’s a healthy list of other equipment too, from LED headlights to an eight-inch touchscreen infotainment system and Harman/Kardon eight-speaker stereo. Various safety features are present to try and keep the GT in the same shape in which it left the dealership, too.

Pricing begins at £33,350, which sounds meaty for a Kia and does just eclipse the £31,995 Stinger GT-Line with the 2-litre engine. That’ll make it a hard sell for someone set on a Korean performance car, but wagon versatility does give the Optima an edge not quite present with its rear-drive sibling. As ever, a seven-year, 100,000-mile warranty is standard.