Kia's new estate has the looks and the engineering focus, but it's not yet a 3-series Touring-lite 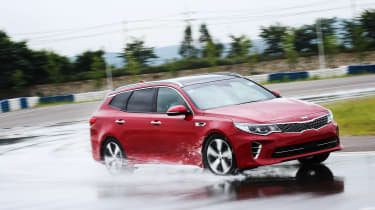 It’s hard to remember when Kia stopped being considered a cheap alternative to the more desirable mainstream European and Japanese brands, but cars like the Optima have undoubtedly contributed to the respect the company now commands in the market.

The Optima Sportswagon is, as the name suggests, an estate version of that car. A damn handsome one at that, and a practical one thanks to 552 litres of boot space with the seats in place and 1686 litres with them flattened. With an ex-BMW M man now driving Kia’s chassis team, good things are promised of its road manners, too.

UK-bound Optimas will get a 1.7-litre CRDi turbodiesel four-cylinder as standard. It makes 139bhp – a mere 5bhp more than before – and 251lb ft of torque, 12lb ft more than the old car.

It’s slightly more refined than the engine it replaces but the real improvements are economical, with a combined figure of 64.2mpg (and 113g/km of CO2), particularly competitive for the segment. That’s with the six-speed manual gearbox; a seven-speed DCT is optional, and drops those figures to 61.4mpg and 120g/km.

The manual is the quickest too, albeit unlikely to trouble the average diesel 3-series Touring or similar: 0-60mph takes 9.8sec. The DCT manages 10.7sec. Quickest, and most frugal, is the new Optima PHEV, a plug-in hybrid (only available as a saloon, for the time being). It develops 202bhp, 274lb ft, and hits 60mph in 9.4sec – with a claimed 176.6mpg average. 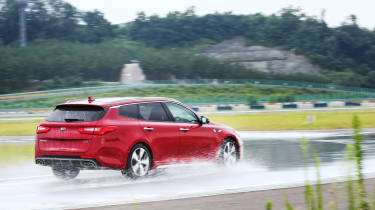 The new Optima Sportswagon benefits from all the improvements wrought to the regular Optima saloon. With direction from Albert Biermann, ex-BMW M, the Optima gets serious engineering changes and smaller detail tweaks to improve it in almost every area.

Over half the body shell is now high-strength steel. The electric power steering motor has moved from the column to the rack, for better feel. Feedback is also improved through the use of different tyres – Michelin Pilot Sport 3s on 18” wheels, rather than the old Nexens – and Kia has chased NVH improvements throughout the car.

The Sportswagon gets unique spring and damper settings to take account of its more rear-biased weight distribution and the likelihood of carrying heavier loads. And the brakes are larger than before on all models, taking advantage of the extra tyre grip.

The previous Optima was distinctly unmemorable to drive. So much so that I had to double-check my notes to remember anything about it, in order to offer some worthy comparison for the new model.

The good news is that the new car is a significant improvement. Between the new tyres and rack-mounted power assistance motor there’s now a more precise and evenly-weighted feel to the steering, and although it’s not teeming with feedback it’s now quick and consistent enough to place the car accurately through corners, and determine when you’ve breached the tyres’ limits.

It feels more agile too, a factor seemingly unaffected by the extra metal at the rear in the Sportswagon. It rides maturely too and isn’t as flummoxed in direction changes as the old car, though body roll is always lurking in harder cornering. But where a spirited drive in the old model would leave you feeling deflated, there's now some enjoyment to be had.

It’s not quite as sharp as say, a Mazda 6, but it now feels like a fully-developed chassis that more than justifies comparison with better-established rivals. Should be a good basis for the upcoming Optima GT, too. 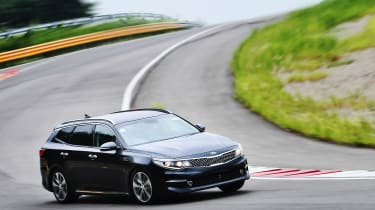 Thankfully, the GT will have a more enthusiastic engine than the 1.7-litre diesel lump that UK-bound Optimas will receive. While it develops more power than before and it’s quieter too, it just doesn’t feel strong enough to propel what is a relatively heavy car – up to 1605kg with the dual-clutch auto.

We tried both – the manual is slick, easy-to-use, not particularly tactile, the auto smooth and relaxing – but even with enthusiastic cog-swapping the Sportswagon always felt a bit of a sluggard. Kia admits that a larger engine would improve the experience, but we suspect the business case would be slim – the Optima is not a big seller in the UK.

The hybrid, as its power figures suggest, felt much more lively. With a six-speed automatic it didn’t have the CVT-style rise-and-fall engine note that hinders many hybrids but did have the welcome low-down urge and silent low-speed progress.

With eco-biased tyres it’s no sports saloon, but it’s indicative of Kia’s improvements that even this distinctly un-sporty model is better to drive than any previous Optima. It's probably the pick of the range.

The hybrid starts at £31,495, a price that includes the UK government’s £2500 plug-in car grand for eligible plug-in hybrids (certain full electric cars get a larger £5000 grant).

Rivals are numerous, and while most customers seem to be flocking to crossovers these days it’s still possible to find a good old fashioned estate in this market. Ford’s Mondeo is one (vast, and not the entertainer it used to be). Mazda’s stylish 6 Tourer is another. At £22,425 it’s priced similarly to the entry-level Kia but offers more power (even at its most basic) and a more involving drive.