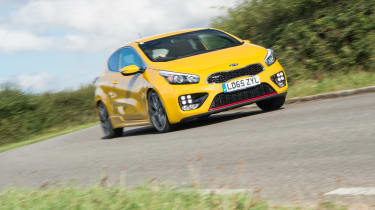 Where most cars in the Proceed’s class make use of 2-litre engines, Kia has stuck to a 1.6-litre unit in the Proceed GT, a size more often found in cars in the class below. It’s a variant of the GDi petrol unit used across Kia and Hyundai’s ranges, and similar – albeit more powerful – than the 1.6 in the old Hyundai Veloster Turbo and the current Hyundai i30 Turbo. It's soon to be found in the Kia Soul, albeit attached to a dual-clutch transmission.

Despite the modest capacity, Kia has still managed to extract 201bhp from the turbocharged four-pot, with maximum power developed at 6000rpm. There’s 195lb ft of torque too, from a relatively low 1750rpm. 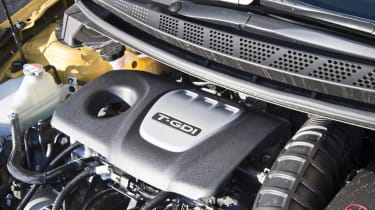 The standard (and sole) transmission is a six-speed manual, and power is transmitted to the front wheels through an open differential, though traction control is there to rein-in any excess wheelspin.

This relatively safe combination does leave the Kia short on firepower next to almost all of its rivals, but those new to the hot hatchback market should still find enough performance to keep themselves entertained.